Of course, many of the things that do this are not art works; seeing a favourite building opened up, the delicate savagery of a crane nibbling on concrete, or just the simple domestic item laying unnoticed for years in an empty building. But many creative works have illustrated one of art’s magical powers: to arrest attention, to demand a double take from the viewer. A number of works have forced me to stop and reposition my body, to take note of when and where I am, to give presence to a new thing in my midst, to acknowledge the presence of an alien being.

We each have our own collection of experiences: the Dance-O-Mat at night in its first setting on St Asaph Street; Chapman’s Homer on Madras Street; the sunset down Gloucester Street as crowds surged in for the first FESTA in 2012; Bruce Russell shredding with the dangling Angel on the corner of Worcester and Oxford streets at Canterbury Tales in 2013. Of such memories cities are made.

And then, of course, possibly the greatest public art intervention the city has seen.

This story started when the Gallery created a programme (Faces from the Collection) of portraits mounted on the side of buildings. A large work by Tony Fomison was placed on the back of the Old Post Office building, under the towering pointed finger of Ronnie van Hout’s Comin’ Down—and over a graffiti work by the artist Slepa.

Fomison’s portrait is of a figure he copied from a newspaper clipping in England during a stay there in the 1960s. The work, titled No!, is an image largely occupied by a giant hand and a face of considered rejection. The tones are unmistakable Fomison, emerging from that wonderfully dark and richly engaging part of New Zealand history that captures McCahon, Baxter, Maddox, Clairmont and others. The romance of a time before I was born—of men doing important things.

It recalls a time of dark, damp flats late at night with cheap red wine, joints and record players. The placement of the work here recalls the wonderful small, forgotten, uneconomic spaces destroyed by the earthquakes. The almost subterranean history of the city that was removed with little recognition to make way for the great ‘clean slate’ in the sky.

It was arresting enough already, but then Slepa delivered the punchline, breaking in behind the barrier restoring his original work and tagging a kind of footnote: ‘Keep your shit 4 the gallerys’. What I liked so much about this act of self-conservation was how it made the obvious claim that no person, group, or discipline has ownership over the weird state of the city, its walls and public spaces. I was happily surprised when the Gallery resisted the temptation to remove the work, implying acceptance of its claim. Suitably the Slepa work was subsequently tagged over and the public argument continued on the wall. One of the great ironies of this series of actions is that Fomison himself was imprisoned at one point for making art on the streets of Paris.

A territorial dispute between an anonymous citizen and a city institution over the placement of an oversized blown-up pasted facsimile of an image of a man that looks eerily like the Prime Minister stolen from a forgotten newspaper from the centre of the Empire. A more concise metaphor for the rebuild I’m yet to find.

Another Brick In The Wall

Coming across an undamaged, fully standing, curved brick wall in the battered eastern suburbs is something of a rarity. 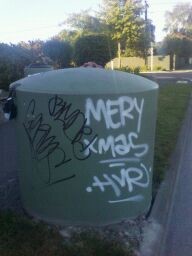 Let it not be said that Christchurch's vandals, ahem, street artists, lack a sense of community spirit.