This article first appeared as 'The meticulous small world of Rita Angus' in The Press on 9 December 2014. 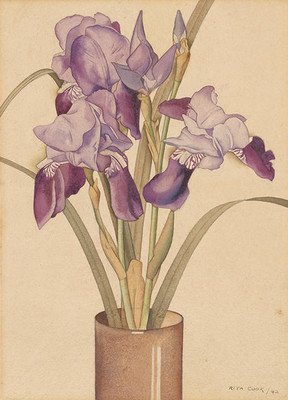 When the National Art Gallery touring retrospective 'Rita Angus' opened at Christchurch's Robert McDougall Art Gallery in 1983, Robert Erwin recalled the conversations he had with Angus while walking together near her Clifton Hill home in the 1950s. Describing her keen interest in the natural world, he alluded to how this had informed her painting: 'She taught me how to look closely at small things, to look outward to larger things, and to reconcile the two'. Born and educated in Christchurch, Erwin worked as a reference librarian at the University of Canterbury between 1972 and 1993 and was the first president of the Friends of the Robert McDougall Art Gallery. He was an avid and knowledgeable consumer of culture, with interests in history, architecture, music and literature as well as the visual arts. Erwin and his partner, the writer and Caxton Press editor Lawrence Baigent, lived together for more than 30 years and when Erwin died in 2003 much of their extensive and significant art collection was bequeathed to Christchurch Art Gallery. This remarkable gift included ten works by Angus – a leading figure in twentieth-century New Zealand art – amongst them this luminous and exquisitely observed watercolour from 1942.

The subject is deceptively simple – a single stem of iris flowers, some open, some still in bud, picked from the artist's garden and placed casually into a modest vase. It's only when you allow your eye to follow the undulating curves of those pendulous petals, each clearly occupying its own distinct position in space, that you begin to appreciate the complex geometry involved in rendering such a composition, let alone making it vibrate with life. Watercolour is a delicate and unstable medium, yet the precision and clarity of Irises is breathtaking, conveying a range of subtle textures, from velvety blooms that seem to absorb the light, to flexing, blade-like leaves and the smooth, shining vase that contains them. Often called 'jewel-like', Angus's flower paintings are meticulous and skilful, yet somehow just as alive as her portraits of people. The writer Janet Paul has described how Angus 'painted the mystery in the everyday' and 'drew people and plants as though seeing them for the first time'.

Angus was fortunate to be born into a family that recognised and valued her artistic abilities and her parents arranged her first private painting lessons while she was at primary school. Those first teachers taught her both the basics of technique and also the importance of observation, or, as Angus put it, how to 'draw seeing every feather'. Believing that the first duty of the artist was to find beauty in daily life, Angus later followed a Chinese approach to observing the natural world, which involved a process of looking, absorbing and remembering. She would often study a subject for hours, concentrating on the essentials of its form, colour and texture.

Angus frequently used flowers as allegorical motifs in her portrait works, echoing their importance as symbols in Medieval and Renaissance art. Named after the Greek goddess of the rainbow, irises have long been associated with faith, wisdom, hope and courage, but for Angus they also held more personal connotations. In a letter to her close friend Douglas Lilburn in 1943, she likened her development as an artist to the growth of 'a tiny New Zealand flower', stating 'I think I may belong to the Iris family one day'. 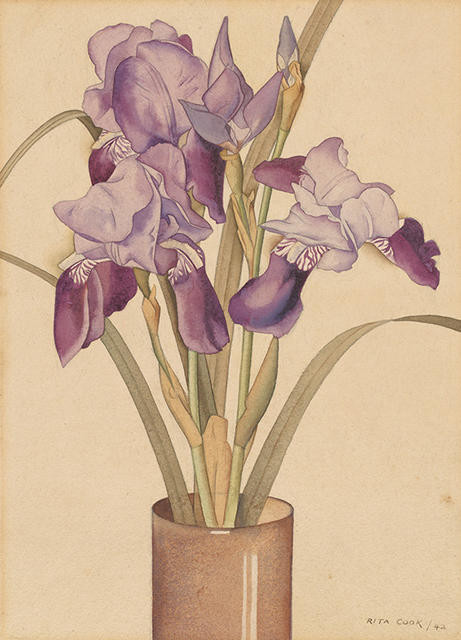 A keen gardener, Rita Angus painted flower studies throughout her career. During the 1940s in particular she painted some very elegant and botanically exact works such as Irises. Her flower studies allude to the symbolic meanings of flowers, a common feature of Medieval and Renaissance art. She often included flowers in her portraits to represent their associated meanings. The iris stands for faith, wisdom and hope. Angus was born in Hastings. She studied at the Canterbury College School of Art from 1927 to 1933. In 1930 she married Canterbury artist Alfred Cook and, although they separated in 1934, she signed her work ‘Rita Cook’ until 1941. She lived and worked in Christchurch until 1955 when she moved to Wellington. In 1958 Angus was awarded an Association of New Zealand Art Societies Fellowship, which allowed her to visit England and Europe.