Ria Bancroft died in Christchurch on 8 March 1993 after a life journey that had taken her in many directions but had denied to her, apart from the last three decades of her life, the opportunity to fulfil herself as an artist.

A commitment to art was made early in her life when as a child her special ability to work in three dimensions was recognised. But it was not until the 1960s that this was tested. In 1961, when Ria was 54 years of age and living and studying art in Italy, she realised that for the remainder of her life her art must be given a chance.

When her daughter Peb Simmons moved to New Zealand with her husband and family, Ria was invited to join them. She agreed, but was very hesitant about leaving a country that for her was the cradle of later western art. Equipped with a Diploma from the Academy of Florence, Ria left for New Zealand arriving in Christchurch on 24 May 1962 to begin a new life as a professional artist and to reclaim some of the time lost. There was a realisation that, while in the past other activities and people had taken priority over her art, the future had to be very different if she was in any way to fulfil her purpose as a sculptor.

Ria gradually settled into the Christchurch art community, which in the early 1960s was on the threshold of renewal. A new generation of post-Second World War artists were emerging with new ideas and a ready acceptance of international directions. This climate of change was, however, only small consolation to Ria against the frustration she felt living in Christchurch rather than Florence. At a most basic practical level the materials and equipment she was accustomed to using were not readily obtainable in New Zealand, and the opportunity to cast her work in bronze was almost non-existent. As in the past when problems developed, Ria found her own solutions and adapted modern resins as an effective substitute material.

Ria became a member of the Canterbury Society of Arts and in 1963 was invited to exhibit with The Group. Among the other artist members at that time were William A. Sutton, Toss Woollaston, Doris Lusk, Micheal Trumic, Pat Mulcahy, Tony Fomison, Ida Lough and Tom Taylor. Included in her early work in New Zealand was Unicycle No 2 and Rocking Horse Ride both of which she showed at the 1963 Group exhibition.

Many artists in New Zealand in the 1960s were beginning to diversify, not only in their materials but also into other art disciplines in their work, and whilst potters and sculptors were not in as great numbers as painters, their position and acceptance had greatly improved from that of a decade earlier. Architects were also looking to sculptors and when new buildings were constructed more commissions were being offered. Ria was included in these developments and from the 1960s, as well as carrying out her own private work, she was also setting time aside for the commissions that came her way. The first major commission she accepted was in 1965 when she was invited by the Christchurch City Council to make a sculpture to be incorporated in the design of the new 'Horizon' restaurant at Christchurch International Airport. The result was the work, Horizon.

Among the other major public commissions of the 1960s was Forms, the 9-metre-long mural, which she made in collaboration with wood artist, Pat Mulcahy, for the Ministry of Works to be incorporated in the design of the foyer of the University of Canterbury's new Science Lecture Hall. Within a very short time, in 1966, the two artists were invited to design a mural for the new New Zealand Broadcasting Corporation building in Rotorua.

There was no question of Ria's status as a sculptor in New Zealand. As early as 1964 she was invited to join the New Zealand Society of Sculptors which had among its members, Mollie McAllister, Carl Sydow, Alison Duff, Paul Beadle, Eric Doudney and Greer Twiss. It was also in the mid 1960s that Ria embarked upon a number of sculpture projects that included religious subjects, a thread in her work that was to grow stronger as the years advanced. A commission for the new parish church of St Mathew's Bryndwr offered an exciting challenge but it was unable to progress when funding proved to be a difficulty.

This disappointment was perhaps not as great as that Ria experienced when her design for the Stewart Fountain in High Street was rejected after having been formally accepted. In 1967 the Christchurch Civic Trust commissioned the Stewart Fountain project and chose Ria's design but then changed its preference in favour of the sculptor Laurence Karasek. The fountain design eventually failed and attempts since to establish a replacement have foundered mostly through civic indecision. Perhaps had Ria's design been honoured it would still be in place today.

Ria's first decade in New Zealand was one of establishing herself as a credible professional sculptor, and in this she succeeded, but it did not ensure a regular income with the result that yet again Ria was obliged to examine her options and compromise her time at the expense of her sculpture. By the early 1970s Ria became more and more involved in art education delivering talks and lectures and in 1971 she accepted a position as art teacher at Xavier College, a boys' High School. Whilst Ria found teaching rewarding, it was draining energy that should have been going into her work and this led to her decision in 1974 to resign.

During the years she was teaching she had not abandoned her sculpture and, though her out put was reduced, she had continued to be involved in a very important project concerned with the conservation and refurbishment of the Roman Catholic Cathedral of the Blessed Sacrament in Barbadoes Street. In 1968 Ria had become a member of a project group convened by Bishop Brian Ashby to examine the conservation and restoration of the cathedral and by the mid 1970s much of this work had been carried out, but a great deal more was to follow. Part of that was the forming of a special side chapel of the Blessed Sacrament within the cathedral. This included a tabernacle above the altar for which Ria was invited to design a pair of doors covering a safe to hold sacramental vessels. For the subject of the doors Ria chose 'Christ has died - Christ is risen.' They were modelled by her in Christchurch and later cast in bronze by a foundry in England. The project was to be a labour of love for Ria and would prove to be her most significant work of that decade.

Of almost equal importance among her religious works of the 1970s was Thy Kingdom Come commissioned for the Holy Cross Chapel in Chancery Lane. By the end of the 1970s Ria's health was becoming less predictable and she became acutely aware of the preciousness of the time that remained in her life.

As a practising Roman Catholic living in New Brighton she was part of the community of the New Brighton parish church which was in the same street where she lived. The decision to redesign the interior of that church enabled Ria to become even more involved, working in collaboration with the sculptor Bing Dawe. Together they redefined many of the furnishing features of the church such as the altar lectern and font but, more importantly they made a cross as a focus for the sanctuary. This was designed by Ria and carved by Bing Dawe.

Following the refurbishment of the church interior in 1982, Ria felt that she would like to make a more personal contribution and decided to make a sculpture which she would gift. The church, which had formerly been named Our Lady Of the Immaculate Conception, had become simply St Mary's so Ria decided to make a seated figure of Mary the mother of Christ, depicting her as a mature woman. The community's opinion and approval was sought before she set about her task. She completed the figure of Mary in 1984. Like the Tabernacle Screen Doors made almost a decade earlier this was, perhaps, her most major work of the 1980s. Its success, in part, was due to the fact that for Ria it was not only a sculpture of religious symbolism but a personal statement about her spirituality and faith.

By the end of the 1980s, with advancing age, Ria continued to work in spite of very fragile health. She felt she could accept one more important commission which was offered to her by All Saints Church in Dunedin. This commission was to make a memorial cross which depicted Christ in majesty. This Christus Rex was a fitting conclusion to Ria's work in public sculpture. Following its completion in 1990 she continued to be offered commissions, but poor health made it impossible to accept.

In 1992 she embarked on one final personal statement, a life size portrait head of the Russian writer and philosopher Alexander Solzhenitsyn. He was someone with whom Ria had felt great empathy with his struggle to fulfil his objective as an artist. The head of Solzhenitsyn was in a real sense a memorial, not only to his struggle and pain, but more poignantly to her own.

Ria Bancroft: Three Decades of Sculpture will comprise many of the most significant works of sculpture, in a variety of media that Ria made during the three decades she was active as an artist in New Zealand. Even though the focus will be on work of the 1960s, 1970s and 1980s there will also be a space dedicated to Ria's early work. In addition an installation showing Ria's methods and process will be included. It is hoped that this will assist in providing a more complete insight into one of Canterbury's more important recent sculptors. 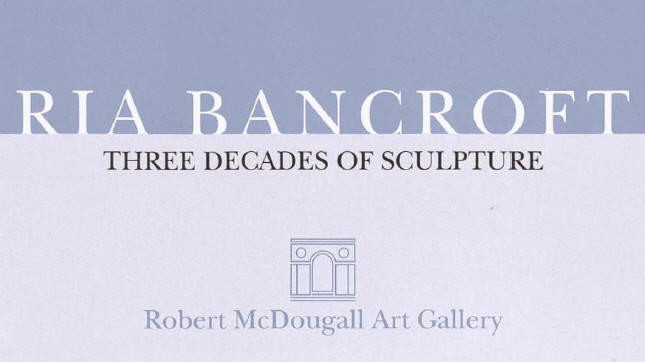 Catalogue of an exhibition of the most significant works of sculpture, that Ria made during the three decades she was active as an artist in New Zealand.