The rugged coastline at Kaikoura was a popular destination for Christchurch artists interested in painting out of doors. Alfred Walsh’s fresh and vigorous treatment conveys the sunlight reflecting off the water and the movement of waves against the shore. The rapid brushwork and economy of detail in Low Tide, Kaikoura Coast is essentially Expressionistic, capturing the whole atmosphere of the scene. By the early 1900s Walsh had established himself as one of the foremost plein air artists in Christchurch. This, despite one reviewer’s complaint that his style had become ‘aggressively splashy’. This painting was exhibited at the 1905 Canterbury Society of Arts annual exhibition. Born in Kyneton, Australia, Walsh arrived in Dunedin with his family in 1864. In 1876 he joined the Public Works department as a draughtsman but also began attending classes at the Dunedin School of Art. In 1887 Walsh was appointed assistant master at Canterbury College School of Art, beginning a long and very influential teaching career that would last 24 years. 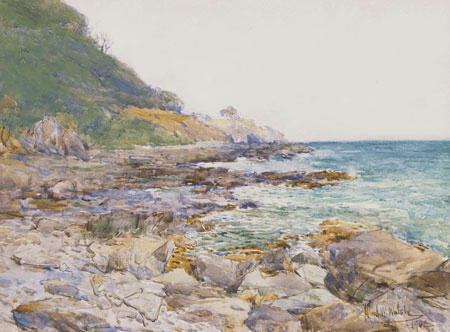