Taxonomy is the game of naming, defining and classifying things – of inventing structures and of saying how these parts connect and those ones don’t. While organic things have familial connections to each other, often the descriptions and lineages imposed on species are hierarchical and subjective. These categories and links are decided and maintained by patriarchal, colonial, heteronormative, wealthy, humanist authorities. Not so with Frankovich’s Atlas of Anti-Taxonomies. The title itself suggests multiple taxonomies and many ways of knowing, and this implies that there are alternative systems through which to describe and understand the world and its inhabitants. For example, these systems could involve queer, Indigenous or embodied perspectives and experiences that enrich and complicate the breadth and depth of our collective knowledge. Incorporating a wide variety of images, the scale and context of their origin is extraordinarily diverse, from macro to micro, the inside of beings to distant views. Frankovich breaks down the barriers between things while enhancing the commonalities between entities. That which is human is no longer
more important than an insect or a piece of grass.

In her book Staying with the Trouble, feminist theorist Donna Haraway proposes that, in order to survive the dramatic effects of the looming climate crisis, we must rethink our relationships with other species and the earth and build towards a more liveable future. This means learning how things exist in complex ecological systems and acknowledging the at times surprising impact of alterations within a network. For instance, we might not know what effects a change in environment or loss of species could have on other things in a neighbourhood, since we are all intricately linked and entangled with each other. She claims:

Coral, along with lichens, are also the earliest instances of symbiosis recognized by biologists; these are the critters that taught biologists to understand the parochialism of their own ideas of individuals and collectives. These critters taught people like me that we are all lichens, all coral.1 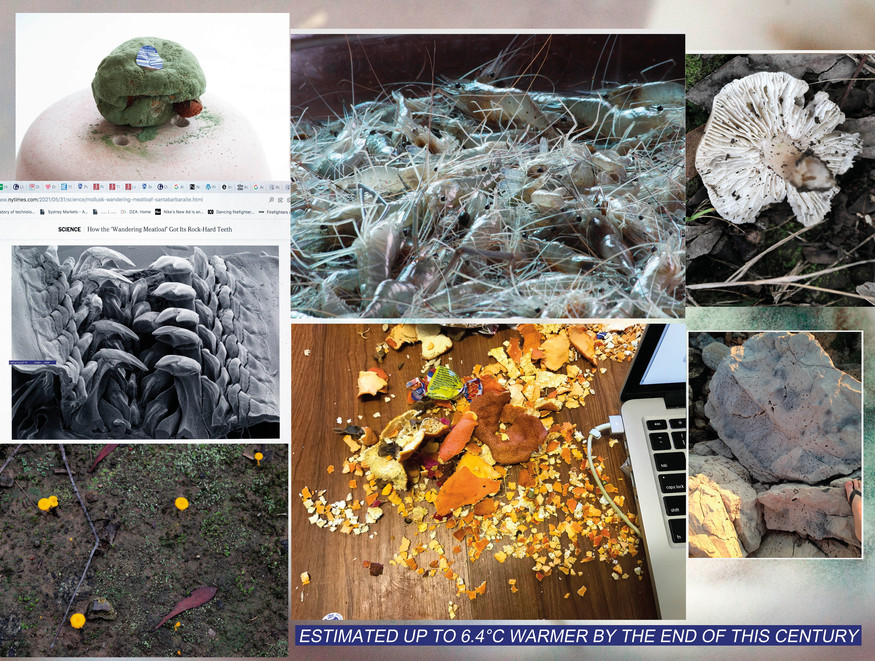 Rather than using the term Anthropocene – which carries with it an assumed human mastery and dominates the climate change debate with humanist rhetoric, as well as erasing responsibilities of imperialism, capitalism and racism – Haraway creates the term Chthulucene (from the Greek chthonos, of the earth), as a way to look towards a future in harmony with our fellow beings. To be ‘inhuman’ means both non-human and also cruel, lacking in the supposed human qualities of compassion and mercy, and this etymology reflects a philosophy that places humans over and above all else – a structuring principle that Frankovich overturns. Instead, she suggests that we exist in dynamic and complex relations to non-humans, whether that be akin to plants, organisms or creatures. There is a wildness to Frankovich’s project that speaks of disorder and desire in ways similar to theorist Jack Halberstam in the book Wild Things; articulating the wild of queerness, bodies, post-human knowledge and the interconnectedness of beings, human and non-human. Unlike nature, wildness is unrestrained and unpredictable. Halberstam writes:

Wildness remains vital in its stubborn persistance, queerly vital. Can we use this queer vitality to navigate contemporary terrains of contradiction, confrontation and complicity? ... the spaces of contradiction that fascinate us now within the economic, the cultural and the social are studded with the shards of the colonial order that has been smashed but that lives on as small pieces of discourse embedded in the choices we make, the ways we relate or cannot, and the way we encounter otherness, success, and failure.2

By unsettling fixed categories and engaging this wild vitality, Frankovich disrupts our binary thinking of human and non-human species, as well as many other divisions we draw up around gender, class and race. When we consider the simple case of a bacteria that lives in the human gut, it is easy to comprehend how the limits of the body are not definitive, that we are porous and constantly intermingle with other species. This notion could be expanded to assist our ways of thinking about living in communities of beings and environments from which it is not possible to classify or segment discrete bodies, rather there is fluidity and interconnection between even the most unlikely critters. Frankovich claims: “There is an undoing of the question of whole earth and whole subject.”3 The array of images clustered on the eight double-sided lightboxes for Atlas of Anti-Taxonomies looks a bit like a Google image search, the endless scroll of images that appear when we search for something on the internet. There are also hints at other online platforms, like Instagram. It’s a reminder of the fraught nature of the digital circulation of images. Artist Hito Steyerl has described this rampant proliferation of .jpg, .tiff and .mov files and more, and how they both deteriorate in quality, becoming ‘poor’, and yet gain currency through wide distribution.4 Of the internet, Steyerl writes:

… images are not objective or subjective renditions of a preexisting condition, or merely treacherous appearances. They are rather nodes of energy and matter that migrate across different supports, shaping and affecting people, landscapes, politics, and social systems.5 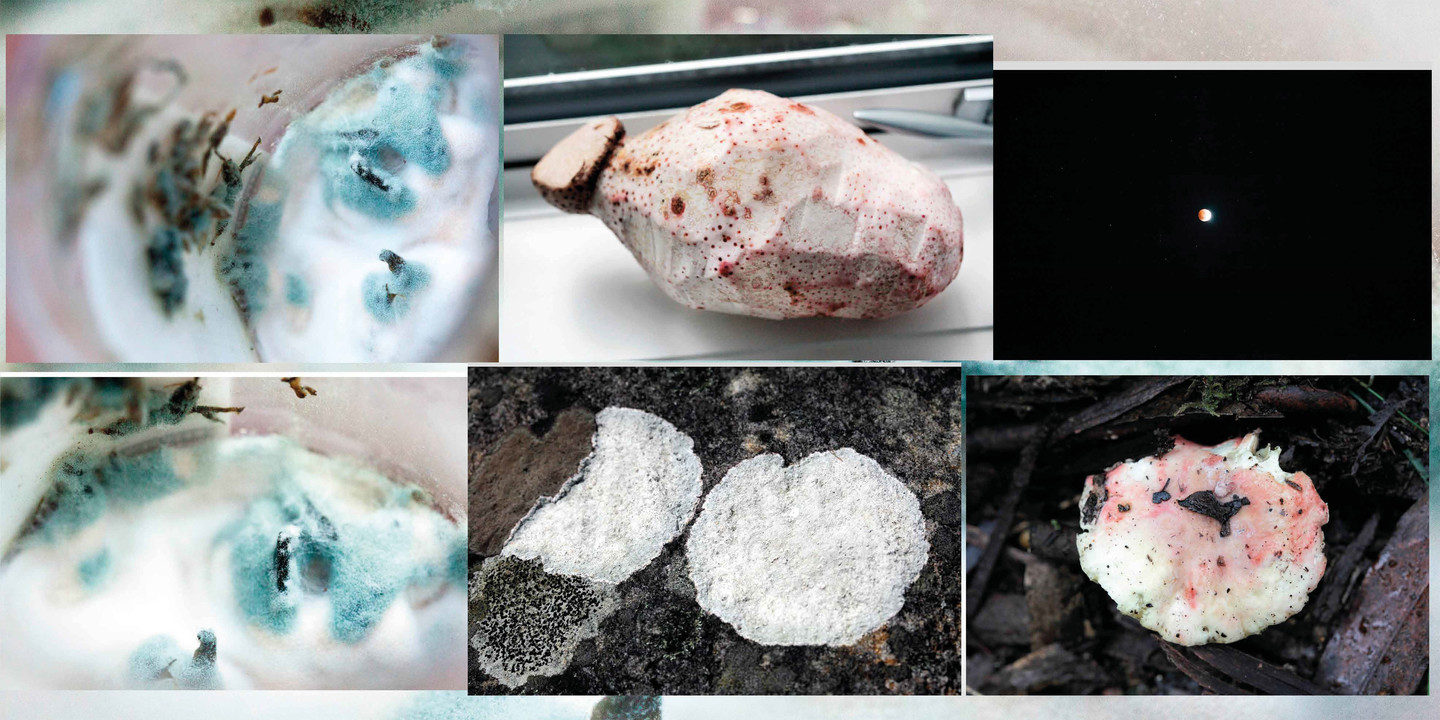 What we might not always consider when making an online search is the infrastructure that supports this function, in terms of the digital technologies and corporations that own them. The metadata and algorithms that power a search are designed by companies with strategic financial targets, and they form an integral part of our capitalist system. There are two key aspects to this: our personal data as a tradeable commodity, and political or economic factors driving the creation of publically accessible information. By working with images from diverse sources and producing her own image database, Frankovich subverts and highlights the controls of the internet algorithm that usually decides what will surface, who will be featured first and what will remain buried.

Atlas of Anti-Taxonomies also visually references an analogue version of non-hierarchical image grouping, the monumental but unfinished Mnemosyne Atlas (1924–29) from German art historian, Aby Warburg (1866–1929). Mnemosyne was the Greek goddess of memory, and Warburg was amassing photographs of artworks, cosmography, maps, people, places and things, which he intended to form a more expansive version of art history based on his theory of collective memory. He arranged nearly 1,000 idiosyncratic images across sixty-three panels (there would eventually have been many more had his project been completed) in an attempt to map the “afterlife of antiquity”. He wanted to show how themes, patterns or motifs repeat across different times and places. Warburg challenged the elitism of art history, and the preferential treatment of certain disciplines or cultures, through his use of anachronistic and wide-ranging images – from painting or sculpture to contemporary culture – in an interplay of imagery across different periods and cultural contexts. Captions were to accompany these groupings, but Warburg was also concerned with Zwischenräume, the spaces in between, and Denkraum, room for thought. We can see this approach of allowing the images to speak for themselves in Frankovich’s work too, though in new and surprising configurations, with some captions that indicate concerns around global warming or viral spread, yet offer plenty of room for the in-between, ambiguity and vacillating meaning.

Frankovich’s Atlas of Anti-Taxonomies is ambitious in scale, and asks us to consider all these reference points and more. Her lush images lure us into complex terrain, and uncomfortable ways of thinking about ourselves and our relationships with fellow inhabitants of the world, without declaring a new fixed taxonomy. We are asked to sit with elements of the unknown, of indeterminacy and shifting ground, to stay with the trouble. In these uncertain times, with the Covid-19 pandemic disrupting daily life and the impacts of the climate crisis increasingly felt by coastal communities in particular across Te Moana-nui-a-Kiwa, Frankovich suggests there are many ways of connecting, seeing and describing things. In doing so, she opens up the potential for new orders, systems and ideas that are not only more appropriate for our contemporary and future worlds, but maybe even hopeful. 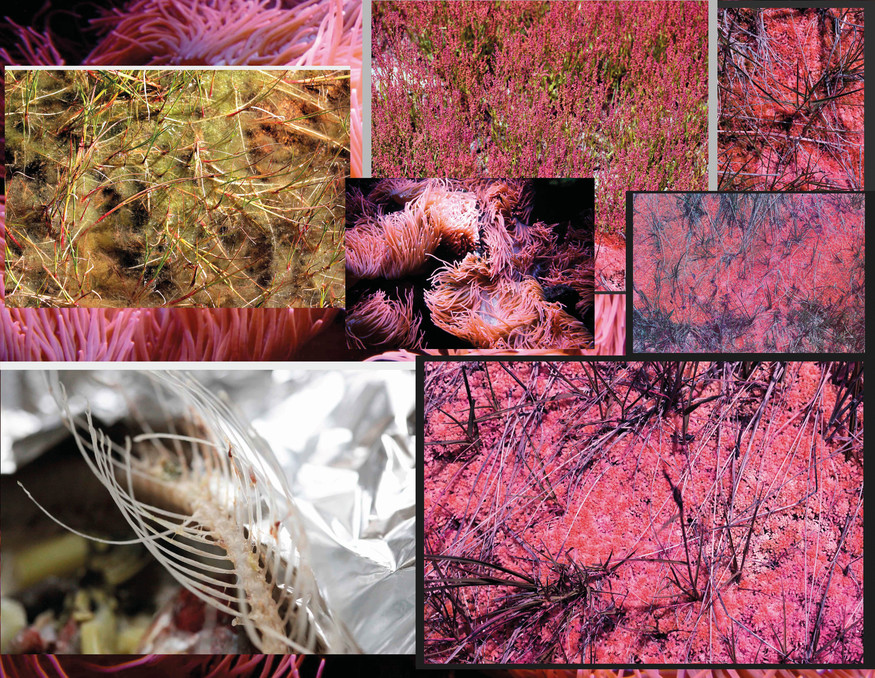 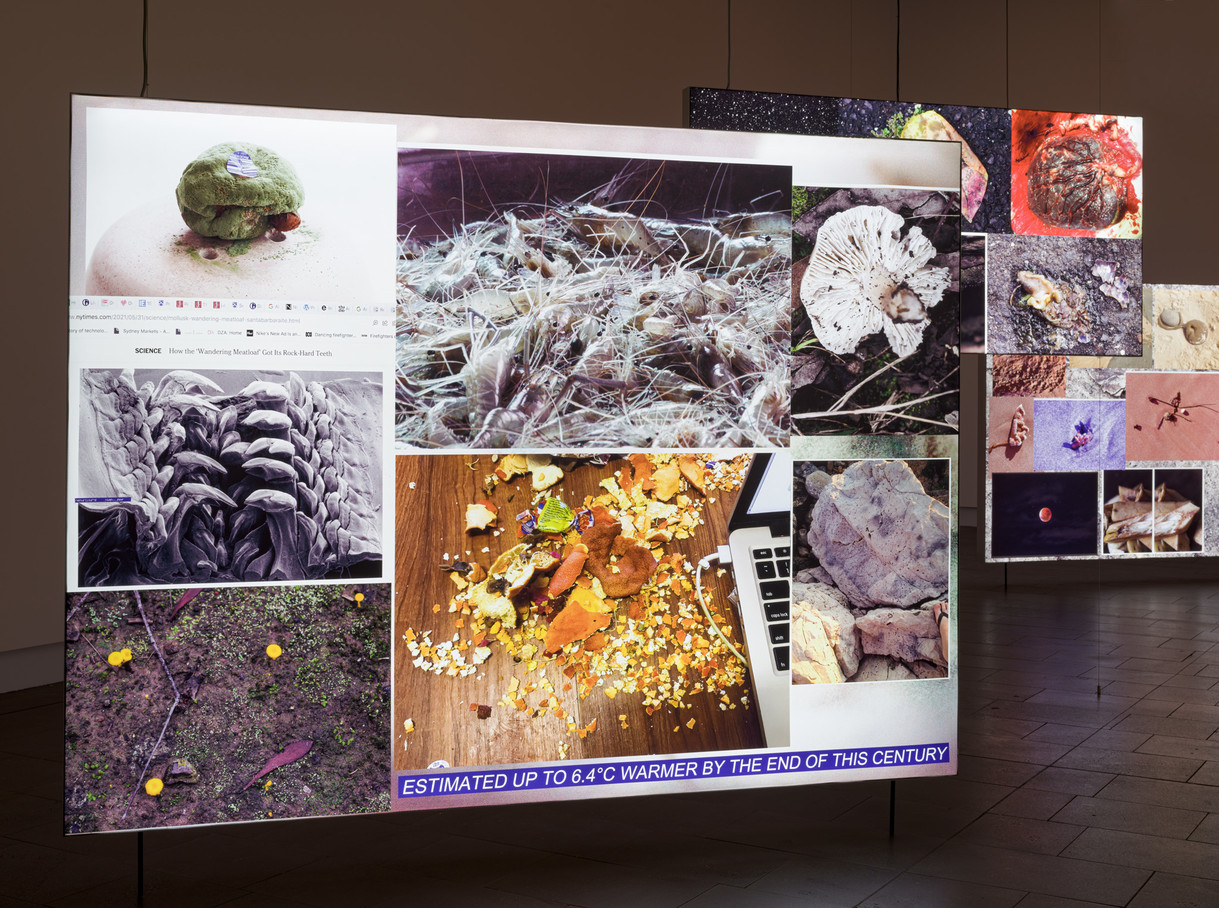 An installation de-categorising the world to reveal the wild disorder of nature. 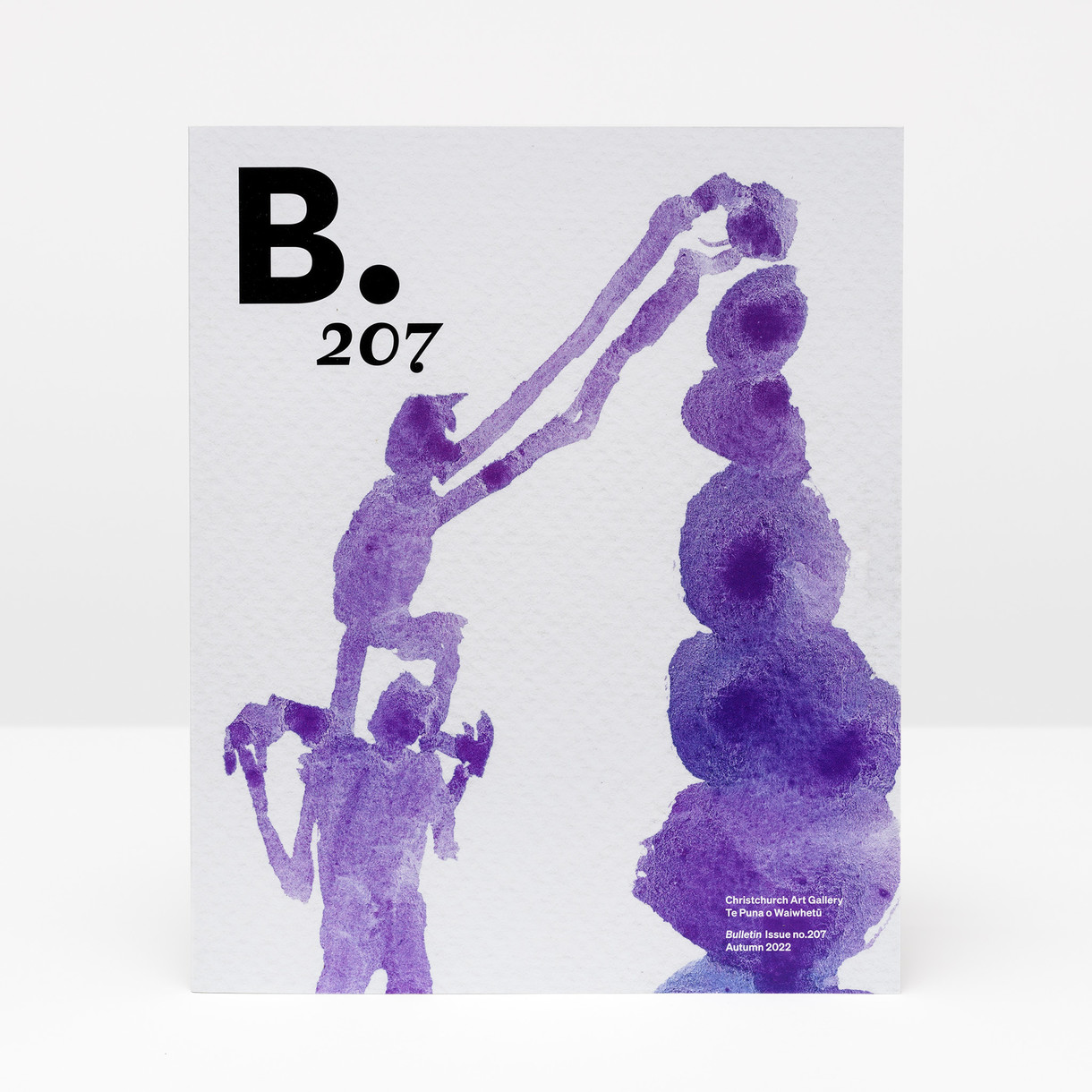