At a memorable supporters’ evening in April we brought our level two TOGETHER partners behind the scenes where most of us work: to the loading bay and collection handling; to the photography studio, the library and our education suite. Not to mention the workshop where the best crates in this part of the world are made!

Throughout the visit our staff demonstrated professional enthusiasm and communicated a palpable sense of collective expertise – as well as a real love of working here. As we looked through the storerooms connections were made between early donors and more recent donors; there were happy people all around. It was a Foundation event organised by Brown Bread and went very smoothly. The next morning we were delighted to receive this email from a supporter who joined us: ‘ just a quick thank you for last night. Nice to be able to feel like a kid in a lolly shop, big smiles all round.’

As we approach the end of the financial year, I’ve been reflecting on the fact we’re been reopened a mere year and five months (six by the time you read this). Exhibitions, always well-designed and displayed, have turned over amazingly smoothly. As I write this, we’ve welcomed more than 470,000 visitors. They report that their experience was ‘mind-blowing’; that they’ve stayed a good while; that they’ve seen more than they anticipated.

In short, we are delighted to be open again and optimistic about the future. How many other public buildings can offer an artist-rendered experience in all of their public lifts or such a brightly-painted car park beneath? We love offering suggestions for what to look at, even if time is limited. We love thinking through the future programme; about what we’re charged with collecting as the main gallery in this part of the world, and about how best to stretch out and embrace the wider world of art.

We recognise our visitor numbers are not yet at as amazing as they were pre-earthquake, and look forward to when they bounce back – as they will in due course. We know that a range of local people remain reluctant to face the central city and negotiate streets which are taking forever to repair and redesign. To an extent we’ve become used to living locally.

However, a vibrant inner-city for Christchurch is on its way – and the Gallery is a central pivot for this. It has taken time to get the Design Store and car park opened; they are now, and we promise the café will also be open before too long.

We’re also excited as we approach the on-site painting and public unveiling of the fourth significant work to mark our five years of closure, Cosmos by renowned English artist Bridget Riley. It will be accompanied by an exhibition featuring a number of works which she is lending Christchurch as a ‘welcome’ for the painting. In the lead up to this, we feature a new interview with the artist, who talks with Paul Moorhouse, senior curator at the National Portrait Gallery, London. Moorhouse visited Riley in her East London studio earlier this year, and discussed the development of her new work for Christchurch.

And prior to the installation of Len Lye: Stopped Short By Wonder in August, Sally Blundell investigates the University of Canterbury’s relationship with the Len Lye Foundation and the development of a ten-metre version of Lye’s Blade from the early 1970s. Charged with fulfilling Lye’s plans for new, larger and louder versions of his works, as well as attempting to deliver previously unrealised pieces, the Foundation works within a highly charged field. Blundell takes a look at some of the issues they face.

Accompanying our beautiful exhibition Sydow: Tomorrow Never Knows, curator Peter Vangioni talks to UK-based artist Stephen Furlonger, who was a friend and contemporary of Carl Sydow’s. Sydow, Furlonger and John Panting all went through the University of Canterbury School of Art together before travelling to London in the 1960s. Here, Furlonger discusses the London expatriate art scene, and the sense of potential that drew artists there.

Also looking at a sense of potential, architect and educator Rau Hoskins investigates the Christchurch rebuild, seeking a Māori presence in our new built landscape, and finds the expression of iwi and hapū cultural identity across the city in some very successful signature projects.

We look forward to the opening of Kushana Bush: The Burning Hours, which comes to us from the Dunedin Public Art Gallery. Here, artist and curator Balamohan Shingade talks to Bush about religion, spirituality, and the rituals she observes from her Dunedin studio. And Nick Spill, formerly a curator at the National Art Gallery and latterly a bodyguard and private investigator in Miami, lifts the lid on a little-known art heist here in Christchurch.

My Favourite comes from Murray Horton, who remembers Tony Fomison the political man; and this quarter’s Postcard is from photographer Ben Cauchi in Berlin. Mark Braunias provides the thirty-third instalment in our Pagework series.

In conclusion, there are three noteworthy matters I’d like to draw your attention to. Firstly, Christchurch Art Gallery Te Puna o Waiwhetū has relationships with various professional organisations, including the Art Association of Australia and New Zealand, which had its last conference in Canberra. For the first time a prize supported by us was awarded to a publication by a Māori or Pasifika writer (matching a longer-standing award to an Aboriginal writer). So along with this year’s judges, we congratulate Dr Rangihiroa Panoho for his recent publication Māori Art: History, Architecture, Landscape and Theory.

Secondly, I want to pay tribute to Ann Betts, whose recent death saddens us all. Ann was the education officer at the former Robert McDougall Art Gallery from 1979 until 2007. She trained many of our longer-serving guides and became a guide herself on her retirement. As Gallery guide Bella Boyd said of her:
She was a natural teacher with many years’ experience… she was such a rich source of information, she didn’t look it up in a book; it just came out of the pores of her skin.
It’s also notable that Ann established the precursor to this magazine as an informative two-pager sent to Friends of the Gallery and schools to remind of all that was on offer. What a legacy.

And finally, I’m so delighted to let all our readers know that we have purchased Shannon Te Ao’s Untitled (Malady) 2016. This beautiful work of video art by the recent Walters Prize winner has mesmerised audiences since the exhibition Tēnei Ao Kawa Nei opened in March.

As many of you know our city-supported budget for collection acquisitions has been dramatically reduced over the last three years as Christchurch re-balances its priorities. However, in this case we have been helped by the generosity of Sheelagh Thompson, who saw fit to give us a wonderful cheque on her 86th birthday! Thank you, Sheelagh, for another gift that will go on giving. 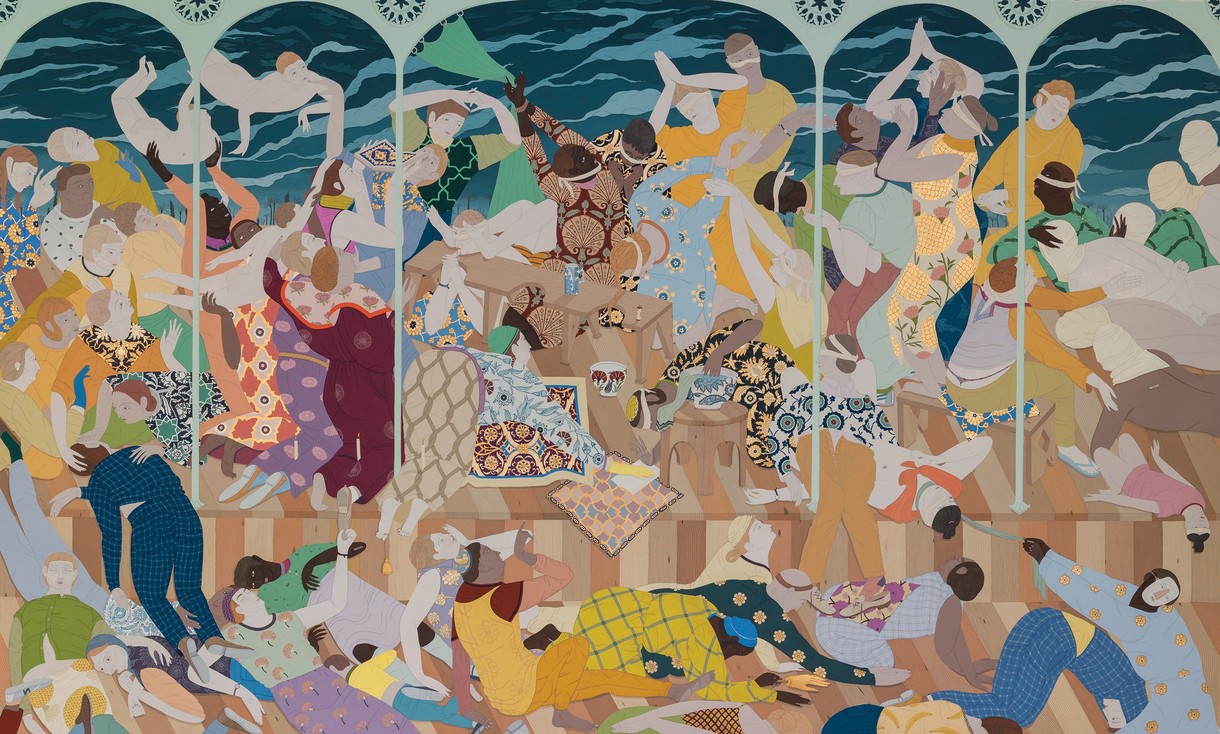 Dazzling paintings that are rich in colour, culture and art history