Static No.12 is itself the product of a moment of good timing. In Shanghai in 2009 to gather footage for a commission, Crooks had risen early and walked with his camera to nearby Xujiahui Park. Crowds of locals gathered there each morning to exercise and meditate, and Crooks hoped to find something complex and rhythmic to film in their activities. Nothing felt quite right, but on his way out Crooks came across an arresting scene: an elderly man immersed in tai chi in a secluded corner of the park. Intuiting a possibility without knowing exactly what would emerge, Crooks set down his tripod and, with a nod of assent from the man, began filming. It was, Crooks notes in retrospect, a moment of pure serendipity – one of those occasions that seem to have been prepared in advance for an artist.

The video opens with bird-chatter, a morning sound, heard while the screen is still dark. Then up fades slow-motion footage of the man in his quiet spot, turning and dipping with the dreamy deliberation of someone moving underwater. The human figures in Crooks's past videos often move at a meditative pace; in the Pan films especially they glide through molten streets with a stunned, moonwalking slowness. Tai chi, however, is a form of movement renowned for being slow in the first place, so to slow it down is to make a special point about the value of taking time. The point is sharpened immeasurably in Static No.12 by Crooks's use of a high-speed camera, which reveals all the strange motion that exists below the threshold of normal perception: the way the man's clothes ripple, the way his musculature shifts, the way he gathers and releases the air around himself.

If this was all Static No.12 had to offer, it would still be an absorbing work: a portrait of a man who is uncannily 'in the moment'. For me, that day at the Biennale, it was the perfect antidote to impatience. But this opening passage turns out be mere preparation for the change – the gorgeous glitch – that soon interrupts the footage. First you notice the man's forehead ripple, and his torso begins to waver and widen. It's soon apparent that not just he but his entire world is fissuring, the two halves of the scene pulling away from each other and leaving a strange stretched space between – a kind of opening in the weave of time where everything turns liquid and semi-abstract. 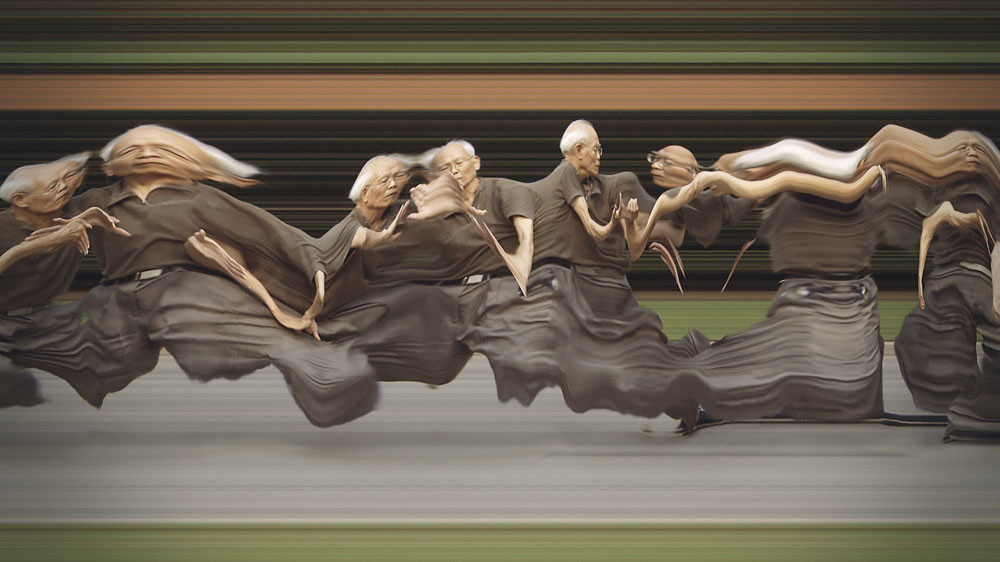 At first glance this shift suggests the shape-changing world of cinematic special effects, where squads of CGI experts regularly make bodies do impossible things. But part of the pleasure of Crooks's art lies in its hands-on, one-man-band ingenuity, the fact that he realises these marvels, not with a budget of millions, but with the digital equivalent of a scalpel and glue stick. It begins with Crooks locating a single frame in the flow of the film, one one-hundredth of a second, and then locating, within that frame, a vertical section just one pixel wide – an ultra-thin sliver of time. In normal video footage, that sliver would be rapidly replaced as new frames come into view. Crooks's simple but pivotal move, however, is to keep all the slivers on view, like strips sliced from photos and glued down in an ever-widening array. As the slivers accumulate, they slowly push the bracketing 'real footage' off screen. What we see growing in the space between is a graph of the man's movements through time.

Descriptions like these make Crooks sound like a cool-headed analyst, reaching into the flow of footage and stretching his human subjects out through time. Certainly there's an analytical quality to his earlier video Static No.11 (running man) (2008), which suggests high-resolution footage extruded by some biomechanics lab of the future. But one of the joys and surprises of the Shanghai film is the way the mechanical comes up against the meditative, the sense that the elderly man is not succumbing to this time-warping process but actually generating it. This is apparent especially on the edges of the 'fissure', where the real footage turns strange and elastic. As he pivots and gestures on this threshold, the man becomes a gestural painter, generating a gliding frieze, a scroll painting, from memories of his own physical movements. There are calligraphic thumb-strokes, Cyclops-eyed smears, leg-sweeps of billowing grey fabric. Frozen like brushstrokes on a canvas, these gestures then travel right across the screen until they're seamlessly 'collected' and absorbed by the other half of his divided image. If this is a portrait, then the self it evokes is not a noun but a verb: endlessly released and reconstituted, unmade and remade.

The unmaking idea comes beautifully to the fore in the video's last and most surprising moments. By this stage the 'graph' fills the entire screen and has assumed a strange life of its own, massing, flexing and breathing like a bizarre human weather system. Then at last it simply evaporates, slowly fading into its leaf-green background like water soaking into a page. What this means in technical terms is that the man has finished; completing his meditative morning routine, he has walked off to carry on with his day. But a purely technical reading is impossible. The man's advanced age and astonishing grace ensure we can't take it that way. We seem to witness, not just the end of a morning's exercise, but the quiet ending of an entire life – the melting of one body and mind into the landscape that surrounds and sustains it.

There's an amazing sense of amplitude here, of emotional as well as visual expansion, as a few minutes of real-time footage dilate into a meditation on transience. Though it's as thrilling to watch as any of his earlier videos, I think Static No.12 marks a shift in Crooks's art, from ingenuity and exhilaration into a larger eloquence. For Crooks, despite the apparent coolness of his method, has always been driven by an obsession: a desire to grasp time as if it were a substance and thus show how our lives in it feel. He has stretched time, compressed it, reversed it, sliced it, examined it from multiple directions. But in Static No.12, with the help of his elderly collaborator, he simply lets time go.

Daniel Crooks: Seek Stillness in Movement is on display at 209 Tuam Street from 5 April until 1 June 2014. This text first appeared in the exhibition publication Marking Time (2012, Museum of Contemporary Art, Australia). Reprinted with kind permission. 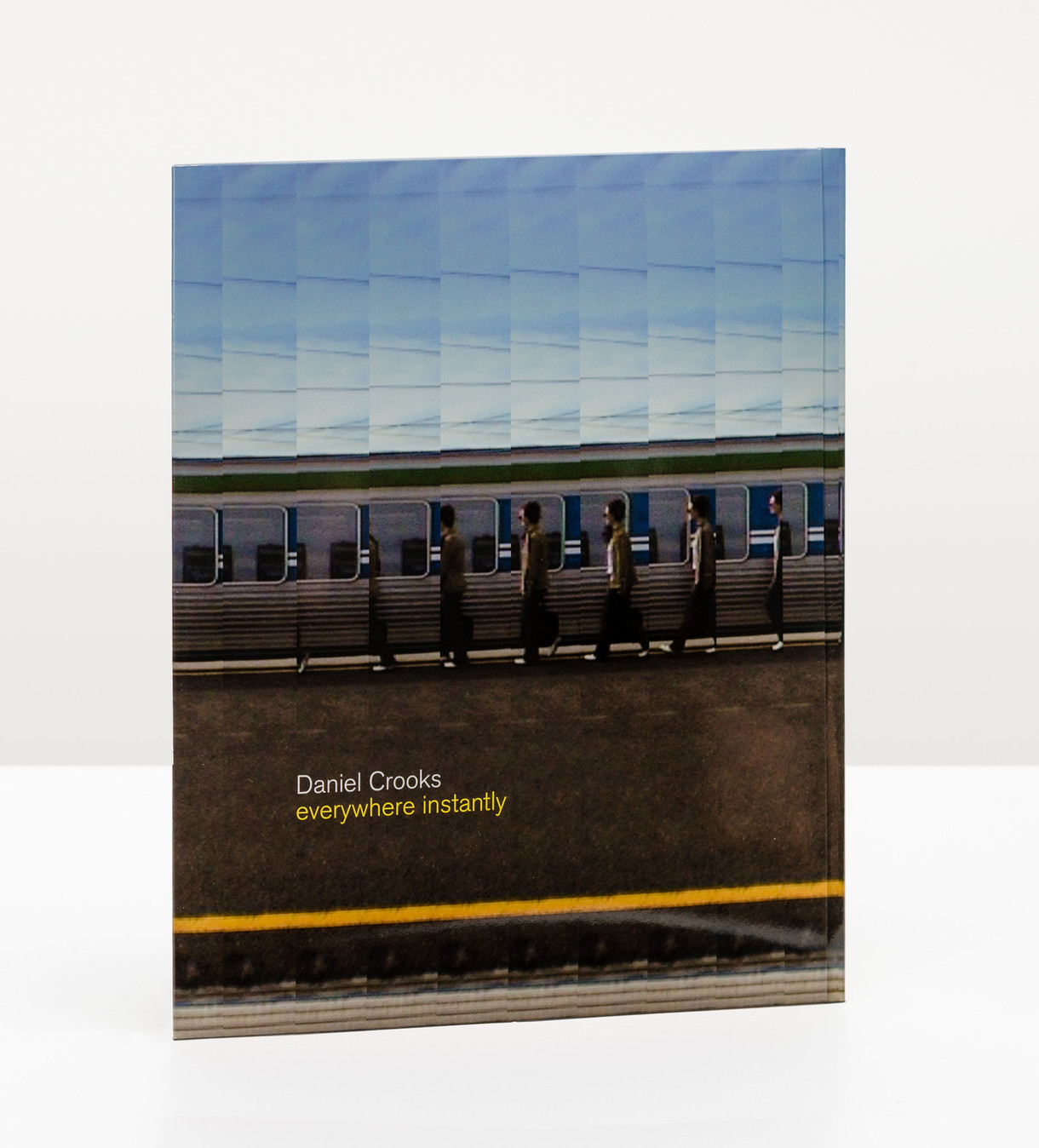 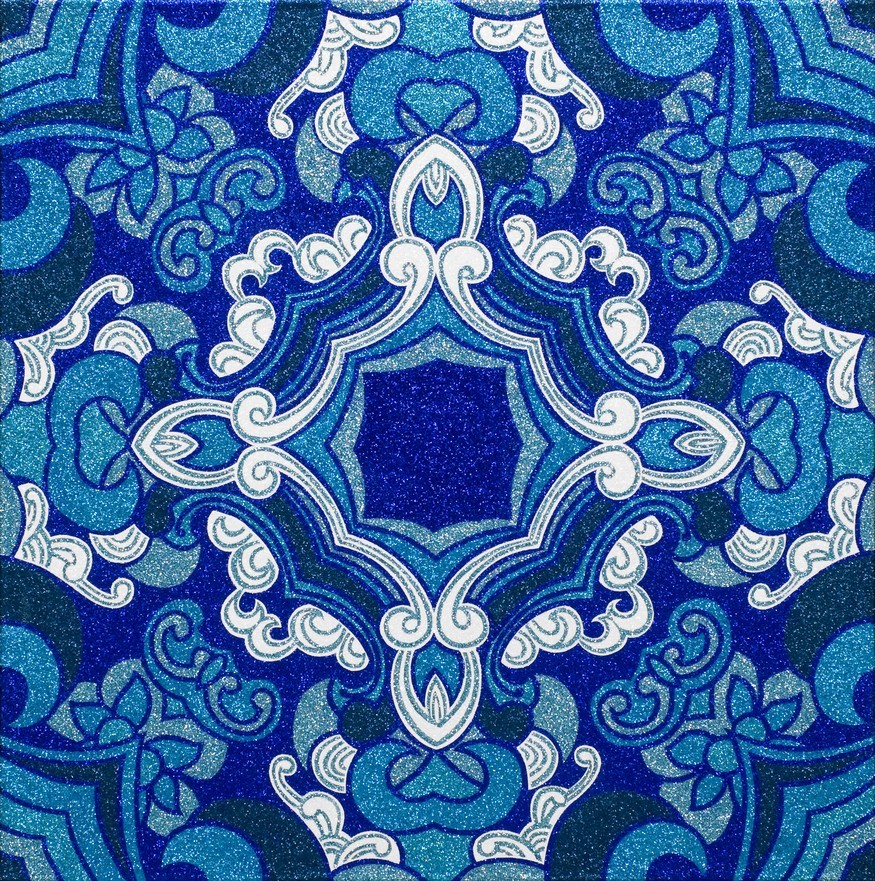 and the Biennale of Sydney in New Zealand