Curator Peter Vangioni said he was delighted to be able to show the work of New Zealand's foremost contemporary artists, who also happens to be a talented drummer.

Bill Hammond: Playing the Drums has been co-curated with the artist himself and features rarely seen works from his private collection alongside pieces from the Gallery and several other Christchurch collections.

“It’s a great opportunity for Christchurch to come together and celebrate one of our own,” Vangioni says.

“The exhibition spans several decades of Hammond’s work and include drawings, prints and paintings from the early 1980s through to some of his most recent pieces, including his iconic bird paintings.”

Hammond is best known for his hauntingly beautiful half-human, half-bird creatures. In these paintings, figures with bird-like heads adopt humanlike stances, conveying a feeling of quiet despair as they gaze out into the distance.

In Waiting for Buller. Bar (1993) Hammond’s figures personify New Zealand’s native birds with a wry sense of humour. Playing pool, drinking wine and relaxing, they wait for the arrival of New Zealand’s colonial ornithologist (or bird stuffer, as Hammond likes to call him) Walter Buller.

Local audiences will also have their first face-to-face encounter with one of Hammond’s largest paintings, Bone Yard Open Home, Cave Painting 4, Convocation of Eagles (2008), which has never been on display in Christchurch before. One of Hammond’s best-known works, the Gallery’s The Fall of Icarus (1995), will make a welcome return on display for the first time in over a decade.

Drumming and percussion, along with an extremely wide ranging interest in music, have been constants throughout Hammond’s life. He played washboard for the legendary New Zealand folk group Band of Hope Jug Band in the late 1960s, and rock drummers, electric guitarists, classical musicians, DJs and flamboyant singers all make appearances in his work, which often also features song titles and lyrics. 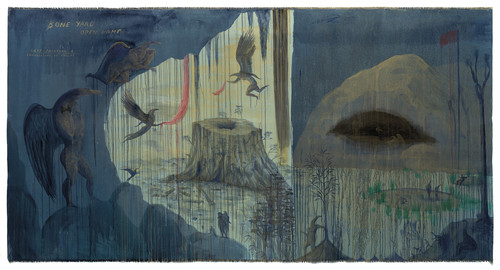 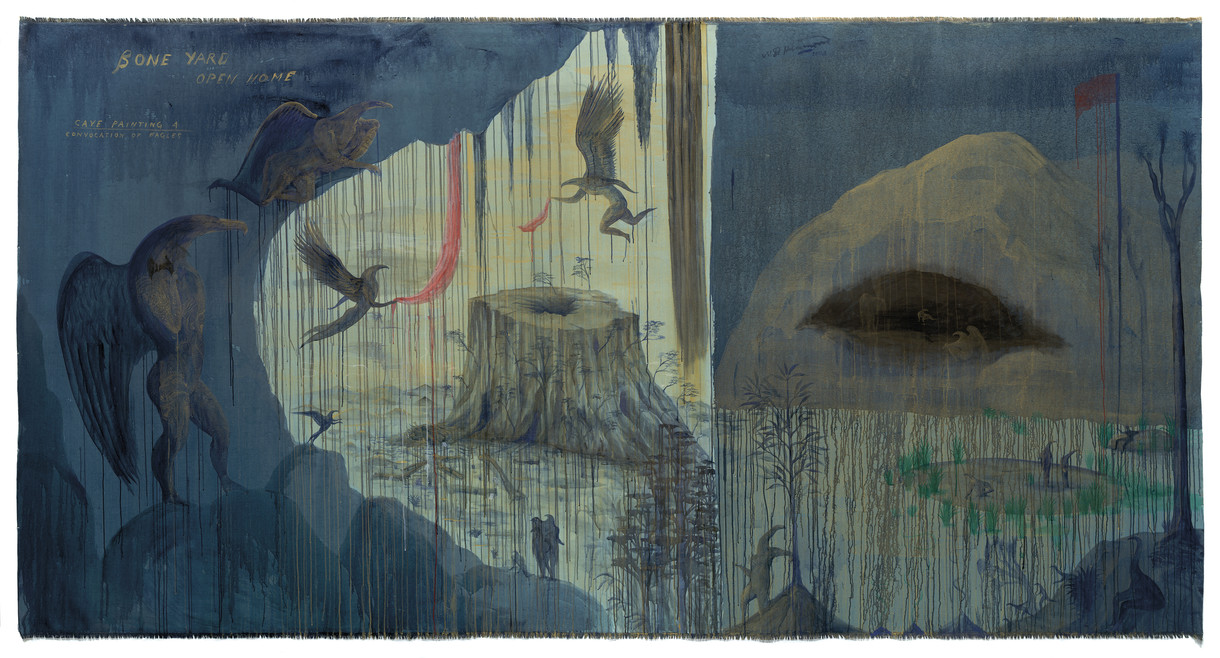 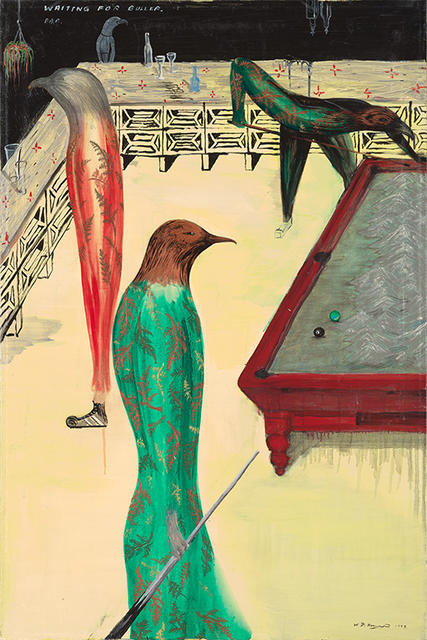 These bird people, for whom Bill is so well known, began to appear in his work around 1993 in paintings such as this one. As the title implies, these characters can be seen to represent Aotearoa New Zealand’s indigenous birds waiting for the arrival of nineteenth-century colonial ornithologists (or, as Bill has called them, bird stuffers) like Walter Buller. Buller and his ilk caused New Zealand’s bird numbers to decline dramatically or disappear altogether as they killed and collected as many species as possible for study and taxidermy. It was a lucrative trade. Bill’s bird people in Waiting for Buller. Bar look ready for a fight, however, as they pass the time drinking and shooting pool on a mountainous table in a seedy bar. 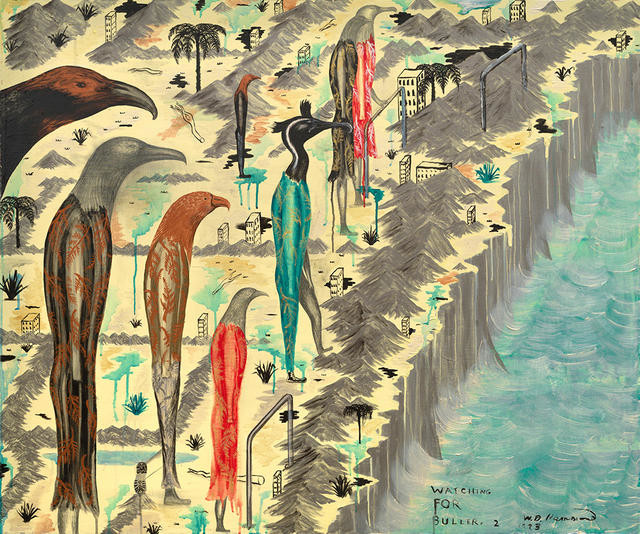 In 1989 Bill and several other New Zealand artists travelled to the remote sub-Antarctic Auckland Islands, a trip that was to have a profound effect on his art. Here, he encountered what he called “paradise for birds”, a place he imagined Aotearoa was like before humans arrived. In his words: [In the Auckland Islands] I saw a New Zealand before there were men and women and dogs and possums. You could see what New Zealand was like, a land of birds. In the Auckland Islands you can stand by 20,000 birds and they don’t take fright, they think they are hallucinating … you can pass by hundreds of yellow-eyed penguins staring out at the horizon in a Zen-like trance. We’d become freakish apparitions. …You feel like a time traveller … as if you have just stumbled upon it – primeval forests, rātās like Walt Disney would make. It’s a beautiful place, but it’s also full of ghosts, shipwrecks, death. 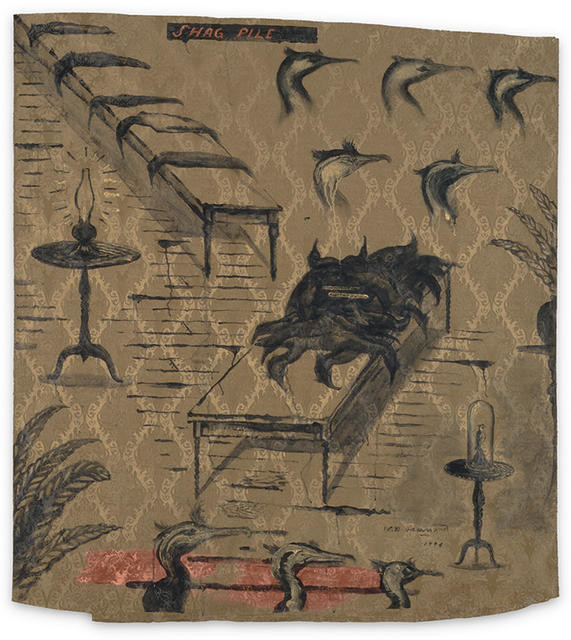 For the exhibition Wunderbox (28 November 2008 - 15 February 2009), this work was displayed with the following label.

Bill Hammond led one of the most influential tendencies in New Zealand painting of the late 1990s – Post-colonial Gothic. Shag Pile is one of his many paintings inspired by nineteenth-century campaigns to catalogue New Zealand’s dwindling native species, in particular the efforts of Walter Lowry Buller. The contradictions of Buller’s character – a recorder and chronicler of birds who killed and stuffed many – have made him a figure of fascination not only for Hammond but also for sculptor Warren Viscoe and playwright Nick Drake. In Shag Pile, Buller’s campaign plays out like a bad dream projected on the patterned walls of a claustrophobic Victorian parlour, where New Zealand spotted shags are heaped, laid out for processing, and sealed under bell jars. 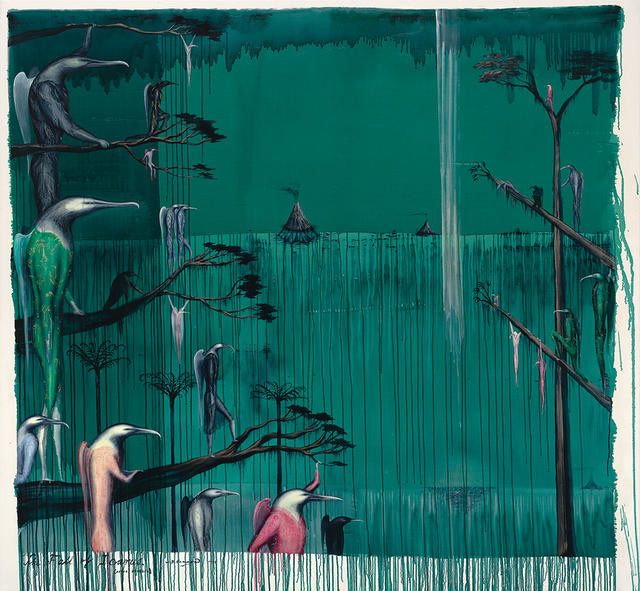 Bill Hammond The Fall of Icarus (after Bruegel)

Bill’s take on Bruegel’s sixteenth-century masterpiece Landscape with the Fall of Icarus is populated with serious, enigmatic bird creatures watching from their treetop perches as one of their own takes wing and fails to fly, crashing centre stage. These birds have been a motif for Bill since the early 1990s, representing the colonised and colonisers of Aotearoa New Zealand. Here, they occupy a primordial time before human habitation. Bill had nineteenth-century bird stuffers like Walter Buller in mind when he painted these birds. Some hold on to branches, needing that reassuring grasp lest they fall off their perch, while others are ghostlike, stretched out in crucifix poses, as if they, too, are about to fall into the abyss of extinction. 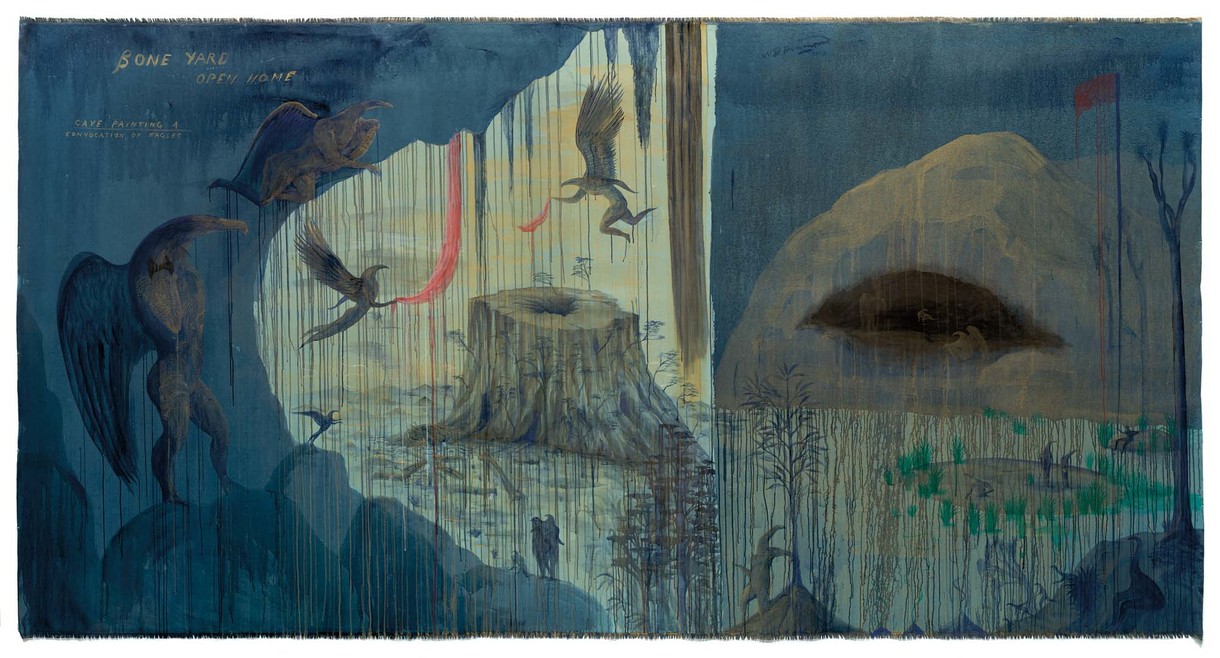 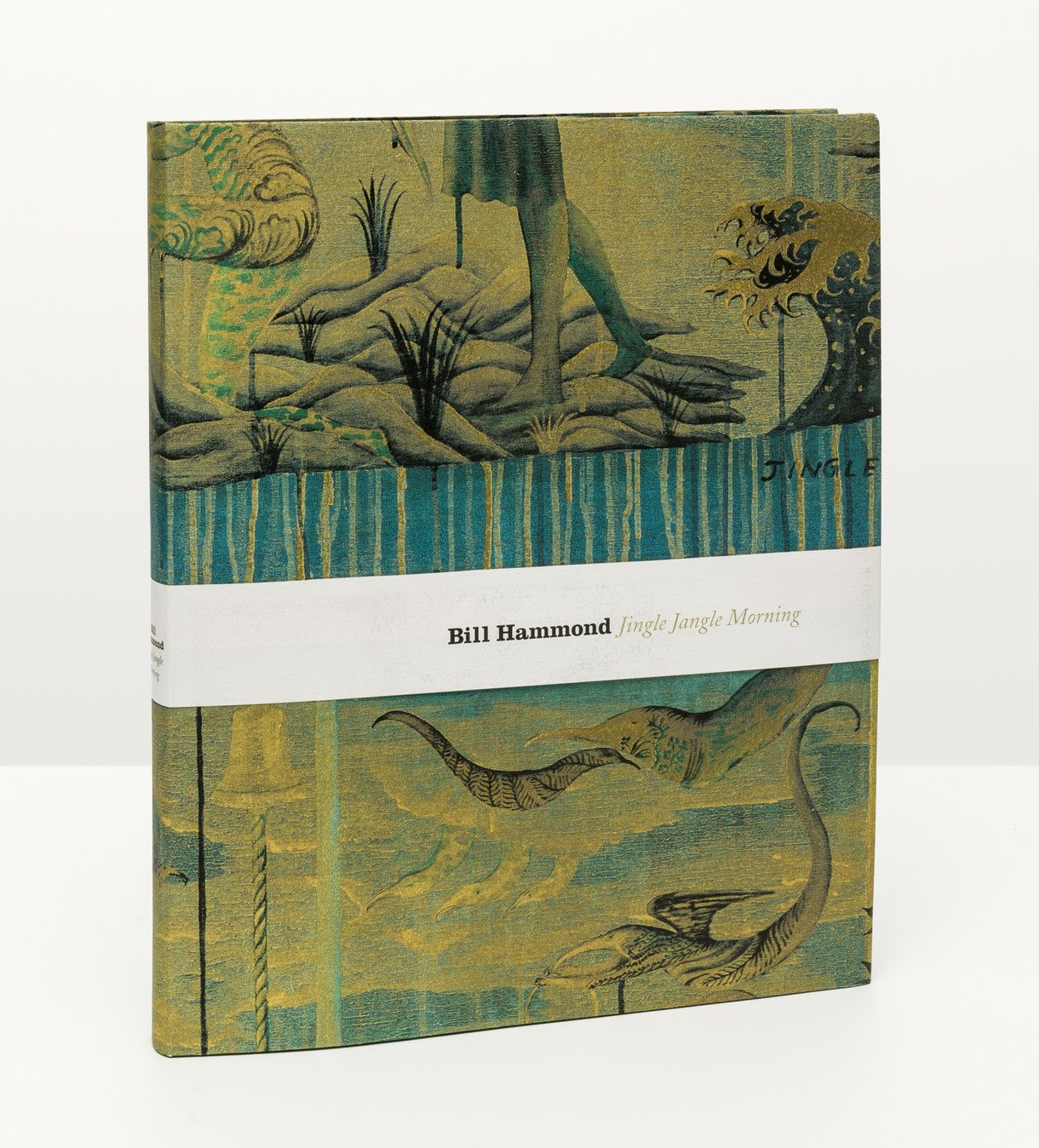