Rosemary Johnson was an environmentalist, concerned with the misuse of the land. Two of these bronze forms suggest cross sections of hills and the third is like a cave and, although the three abstract cast bronze forms are obviously deliberate reductions of the landscape, their smooth natural forms and highly polished surfaces give them a real, physical quality. Johnson worked with traditional materials, such as bronze and brass, reflecting her training at the Central School of Art and Design in London where she studied metal casting processes. Johnson’s use of simple, partially abstract cast bronze forms relates broadly to the work of the British artist Henry Moore (1898 -1986).

Born in Christchurch, Johnson studied at the University of Canterbury School of Fine Art from 1962-1965. She began exhibiting at the Canterbury Society of Arts while she was still a student. Johnson then travelled to Britain to study. She exhibited at the Brighton Festival in 1968 and with the John Whibley Gallery and Jacey Galleries in London. Johnson returned to New Zealand in 1969. 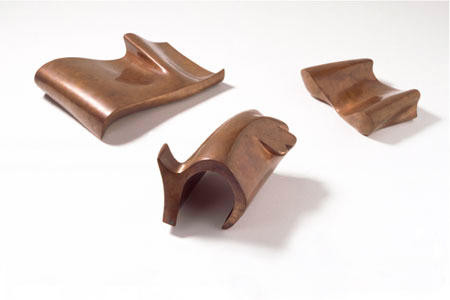