Although Charles Goldie made at least three portraits of this kaumātua (elder), he is one of several sitters who remains incompletely identified. When bequeathed to the city’s art collection in 1943, the portrait was titled Whitening Snow of Venerable Age, with no sitter’s name attached. The identification ‘Tamati Pehiriri, a Noble Chieftain of the Ngāpuhi Tribe’ came at a later, unknown date. While no biography about this person has yet surfaced, his surname identifies him as a descendant of Te Pehi riri o Kaitara, a leader in the late 1700s of Ngāti Hineira and Te Uri Taniwha hapu of Ngāpuhi, in the far north Te Ahuahu district. His name also links him to the Ngāpuhi chief Mihaka Pehiriri, who in 1871 published a biography of the eminent Ngāpuhi leader Tamati Waka Nene, whose portrait Goldie also later painted from a photograph.

Information is welcomed from visitors, particularly those with family links. 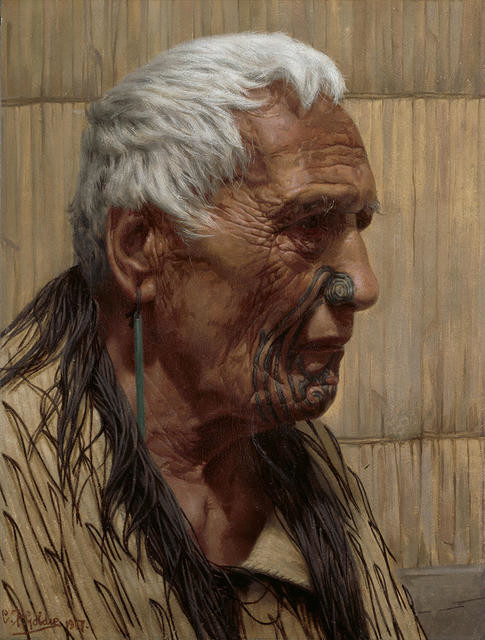