Derelict farm buildings were a distinctive feature in the rural landscape of the 1920s and 1930s. They were the remnants of early colonial buildings that had been abandoned. Roland Hipkins wanted to portray ‘the spirit of the country’ in his work, believing it was a way of fostering national identity in art. Hipkins was a firm supporter of printmaking, particularly wood and line blocks. His detailed and careful use of line can be seen in this work. Born in Staffordshire, England, Hipkins studied at the Royal College of Art in London. In 1922 he emigrated under the La Trobe Scheme, which encouraged British art teachers to come to New Zealand. He took up a position teaching art at the Napier Technical College and in 1923 married the Scottish artist Jenny Campbell who was also based in Napier. In 1929 Hipkins began lecturing in art and craft at the Wellington Technical College. He retired to Napier where he helped to form the Napier Society of Arts and Crafts. 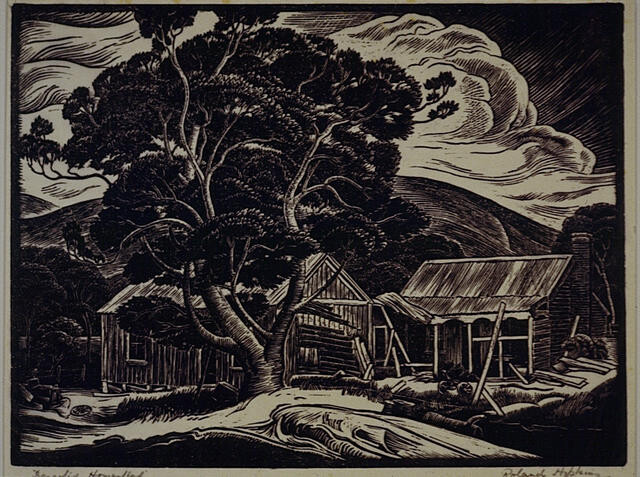