Ewe with Lambs is typical of Richard Ansdell’s animal paintings, featuring a subject he repeated many times. The protective ewe and her two lambs are painted with careful realism and attention to fine detail. Animal painting was a popular subject with British artists during the 18th and 19th centuries. Hunting scenes and animals relating to agriculture found ready markets in a population which was becoming increasingly urbanised and industrial. Ansdell closely followed the style of Edwin Landseer(1802 -1873) whose Scottish highland farming and hunting scenes were very popular. Born in Liverpool, Ansdell studied first with W.C.Smith, a profile and portrait painter in Kent, then at the Liverpool Academy in 1835. He set himself up as a full-time painter in Liverpool during 1836. The following year he was elected to the Liverpool Academy and became its president in 1845. Ansdell began exhibiting at the Royal Academy in 1840 and was elected an Associate of the Royal Academy in 1861. 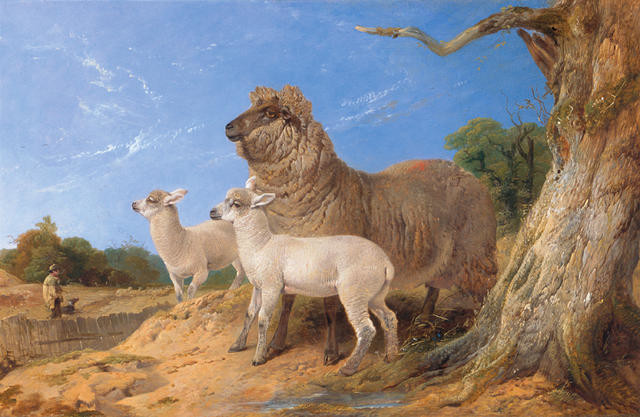