Located on the coast just south of Melbourne, Cape Schanck has been a popular painting site for artists since the 1850s. The natural features of the new world were of great fascination to the European art market and Australian settlers were also very interested in landscapes of this type, so there was a ready domestic market for Nicholas Chevalier’s work. Working in a precise, academic manner with a concern for detail, he would have painted in his studio from sketches. Born in St Petersburg, in 1845 Chevalier left Russia with his parents for Switzerland where he studied painting. He later studied architecture in both Munich and London. Chevalier began exhibiting with the Royal Academy in 1852. Late in 1854 he left for Melbourne. He travelled to New Zealand where he was commissioned by the Otago and Canterbury Provincial Councils to paint the ‘scenic beauties’ of the regions in 1865/1866. Chevalier returned to England in 1870. Due to health problems he did little painting after 1886. He died in London. 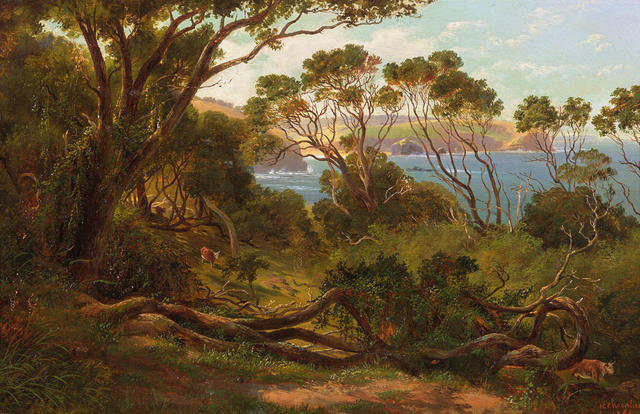