Castle Hill rises above the rocky limestone outcrops of the surrounding countryside in the Southern Alps of New Zealand. ‘Middle Earth’ country, for followers of Lord of the Rings. A sheep station was established here in the 1860s and in the days of coach travel between Canterbury and the West Coast a large accommodation house was established, built of the local limestone.

A gifted amateur, James Richmond brought to his skills as a watercolourist his engineering accuracy and attention to detail. This landscape would have been completed in the studio from sketches he made in the open. The scale of this work displays Richmond’s confidence with watercolour.

Born in London, Richmond trained as a civil engineer. He moved to New Zealand in 1850. To escape the Land Wars in Taranaki, in 1862 Richmond shifted to Nelson where he became Commissioner of Crown Lands. Later he became an important figure in the Cabinet and Minister of Native Affairs. 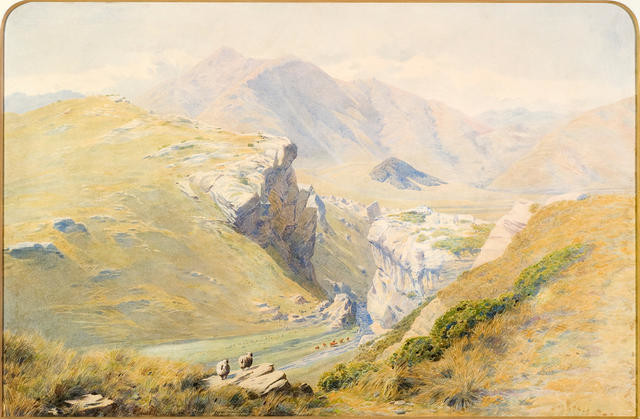