This article first appeared as 'Seal of approval for video' in The Press on 20 April 2016. 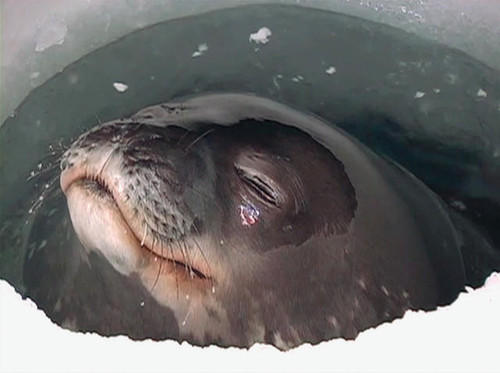 The footage opens slowly with a hole in the ice, its glassy blue waters held perfectly still. The surface heaves slightly, then is suddenly broken: we are brought face-to-face with the southernmost mammal living on the planet, a Weddell seal bursting noisily into view. Drawing well-earned deep breath and rising and submerging, the creature stares at the camera yearningly, as if prepped for its starring role. Powerful nostrils flare, alternating between wide open and tightly shut, and it also closes its eyes. The usually invisible act of breathing is made manifest and impressive, and the viewer becomes transfixed.

The longest recorded dive for a Weddell seal is 96 minutes. This spectacular capability is linked to the seal’s need to find breathing holes in the Antarctic ice pack while diving for prey. Its preferred diet is fish, krill, squid, cephalopods and crustaceans, over 50 kg of which are consumed by an active adult per day. The Weddell seal can dive up to 600 metres deep; the necessary breathing holes at the surface, if not naturally available, must be formed by their own teeth. This is a creature to be respected and admired.

The Los Angeles-based photographer, artist, university professor and activist Connie Samaras made this video in Antarctica in 2005 while on an American National Science Foundation’s Artists and Writers grant. The recording was part of a photographic project she titled V.A.L.I.S., standing for Vast Active Living Intelligence System, lifted from a 1981 Philip K. Dick science fiction novel. The chosen title fits.

As the seal inhales and exhales, it joins us to the rhythms – even to the idea – of its essential existence. Before this footage, it seems beyond remarkable that there should be any living, breathing creatures at all. It also seems incredible to consider the endless web of finely tuned, finely balanced living systems on the planet; the interdependence of everything in the natural world; the complexity and exactness of how things work. In inviting such wonder, this work also speaks to increasingly critical environmental concerns.

Born in Albuquerque, New Mexico in 1950, Connie Samaras has been often drawn to extreme and paradoxical environments. Since the Antarctica project, she has photographed in cities such as Las Vegas and Dubai, whose shopping mall ski slopes and ‘world’s tallest buildings’ seem not unrelated to her Antarctica project. More recently, she has documented women-only trailer home parks or emerging corporate space launch facilities under construction in the American desert. Her abiding intent appears a consistent, questioning critique of the ways in which we live on the earth.

(This video work is currently on display in the exhibition Beasts.) 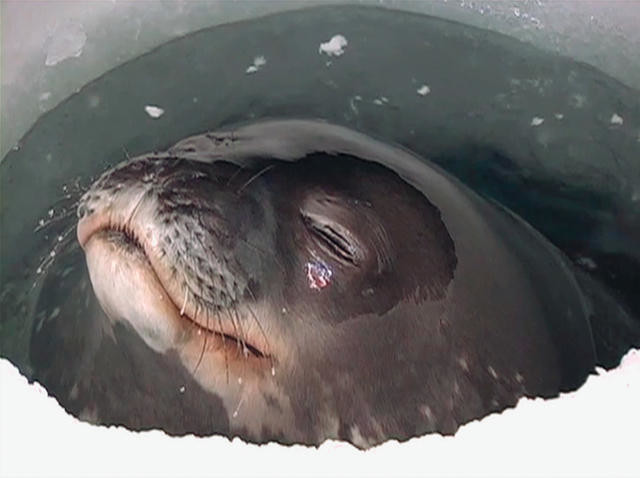 A seal breaks through the ice and begins oxygenating; slowly opening and closing her eyes as she fills her lungs with air. Weddell seals live and breed on the ice shelves around Antarctica, further south than any other mammal on the planet. They move between holes in the ice to hunt, and have been recorded holding their breath for up to ninety-six minutes. Connie Samaras made this video while on a residency in Antarctica. Like many of her works, it invites us to consider the two-way dependency of our relationship with the environment, the fragility of the body and our tenuous grip on survival.

The images shown here are stills taken from the video.