The crescent, cross, triangle, heart and star forms are Mâori weaving designs that Para Matchitt has re-interpreted in a new context. They are intended for symbolic as well as decorative effect. Dominating this composition is the triangle, which symbolises both a mountain and meeting house. Huakina is a typical example of Matchitt's work, which often combines decorative imagery with modern materials and techniques. Here he has used the technique of serigraphy, which is also known as silkscreen printing. Matchitt was born at Tokomaru Bay, on the East Coast of the North Island. He was educated at Auckland and Dunedin Teachers' Colleges. In 1958 he was appointed the Mâori Arts and Crafts organiser for the South Auckland Education Board and has filled roles as an arts adviser in Wanganui, Hawke's Bay and Gisborne. Matchitt has exhibited both nationally and internationally since 1961, including at the Paris Biennale in 1964. 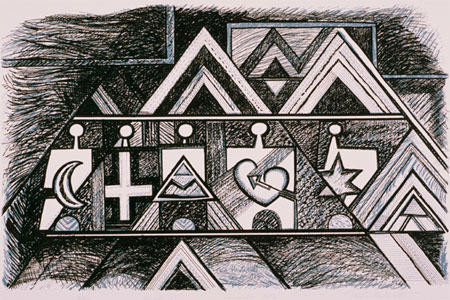