During the colonial period of New Zealand art, flowers were a popular subject, considered particularly appropriate for women artists. In this watercolour Rosa Sawtell has focused on the intricate forms of massed rose blooms. The plainness of the panelled background emphasises the flower forms.

Sawtell’s skill with watercolours is evident in this delicately painted work. She has used a tightly painted technique to render the details of the carved design work of the table, but broader washes for the background to create a focus on the roses.

Sawtell (née Budden) was born in Christchurch and was a foundation student at the Canterbury College School of Art when it opened in 1882. She exhibited frequently with the Canterbury Society of Arts from 1883 to 1940 and was awarded a silver medal by the Society in 1888. From 1893 to 1896 Sawtell was a prominent member of the Palette Club. She also exhibited with The Group in 1935 and 1936. Sawtell was the secretary for the Society for Imperial Culture in 1920s. 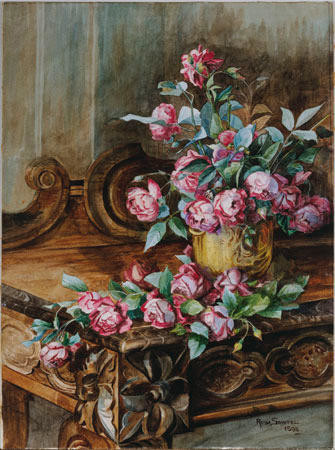