Burnham Beeches is the remains of a great primeval forest that once covered much of the county of Buckinghamshire. It lies a short distance to the west of London and became a public domain in 1880. At that time there was considerable concern about the rapid growth of London and its impact on the countryside. Art showing rural scenes became very popular and Octavius Rickatson produced many romantic rural works throughout his career. This painting shows Rickatson’s traditional watercolour approach. Requiring a great deal of skill, the composition is built up with carefully layered washes of colour. Near Burnham Beeches was exhibited at the 1887 Royal Academy Exhibition.

Little is known of Rickatson, except that he was based in London for most of his career. He first exhibited at the Royal Academy in 1880 and did so regularly until 1893. He also exhibited with the New Watercolour Society and the Royal Society of British Artists, of which he was made a member in 1890. 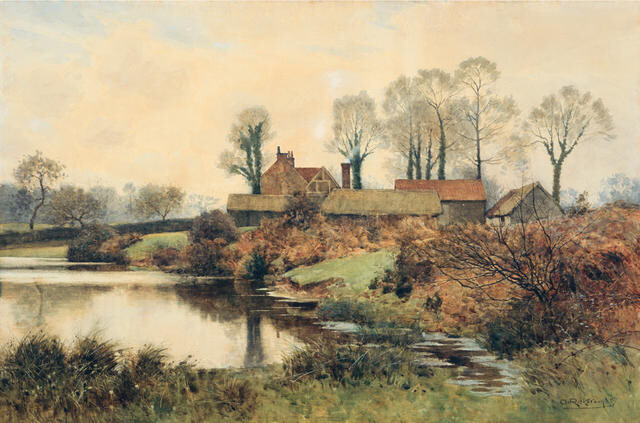