Between 1937 and 1939 Alexander McLintock was studying towards a PhD at King’s College, University of London. Inspired by the docks on the River Thames, he produced a number of works based on the industry that ran along the riverbanks. These included several based on London’s Limehouse. McLintock had been taught etching at the Dunedin School of Art. His precise and skilled draughtsmanship reflects the style of W.H. Allen, his teacher at the school. For McLintock, however, art had to be fitted in with his work as a teacher and later Professor of History at Otago University. McLintock was born in Gore and raised in Dunedin. He exhibited at the ‘Coronation Exhibition’ of the Royal Academy of Arts, London, in 1937 and in later years exhibited at the Royal Academy and the Paris Salon. In 1939 he was Director of the ‘Centennial Exhibition of New Zealand Art’. In 1952 McLintock became parliamentary Historian in Wellington, a position he held until his retirement in 1968. 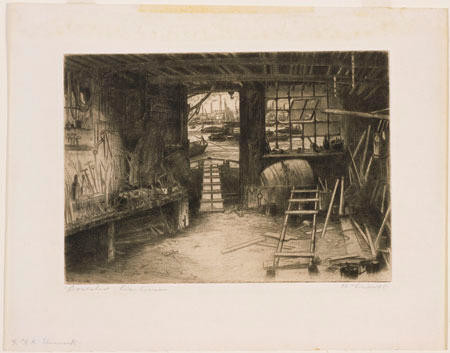