This bustling image of busy New Yorkers going about their daily business, dwarfed by the city’s tall buildings, is one of a group of works by Christopher Nevinson called the ‘American set’. These grew out of a trip Nevinson had made in 1919 when an exhibition of his war work was being held at Frederick Keppel’s Gallery in New York. When he studied in Paris during 1912 and 1913, Nevinson was influenced by the Cubist and Futurist movements and these influences remained prominent in his work for a number of years. Born in London, Nevinson studied at St John’s Wood School and the Slade School between 1908 and 1912. In Paris he studied at the Académie Julian and the Circle Russe and shared a studio with the Italian artist Amedeo Modigliani (1884 - 1920). In 1913 Nevinson became a founding member of the London Group. He was appointed official war artist in 1917 and was a member of several prominent art societies, such as the Royal Academy, during his career. 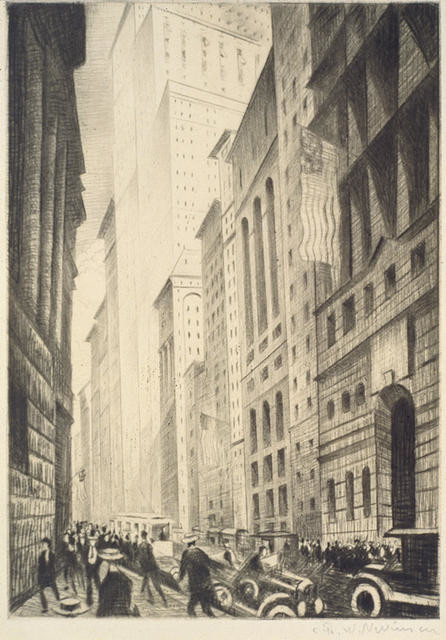