John Whichelo has captured the misty atmospheric qualities of a snowstorm, just allowing the Wimbledon Windmill to be made out in the distance. In 1864 the Lord of the Manor of Wimbledon tried to have much of the Common enclosed as a park for a new manor, but was stopped, which is why the open spaces of Wimbledon Common can be enjoyed today. Whichelo’s skill with watercolour can be seen in how he has used wet washes of colour to create the foggy effect In the foreground, however, he has painted the branches, figure and cattle with great care. Coming from a family of artists, Whichelo is known to have been painting at least by 1806. He first exhibited with the Royal Academy in 1810 and continued exhibiting sporadically with the academy until 1844. He came to be described as ‘Marine and Landscape Painter to H.R.H. the Prince Regent’. Whichelo also worked as a topographer. He was elected an Associate of the Old Water Colour Society in 1823. 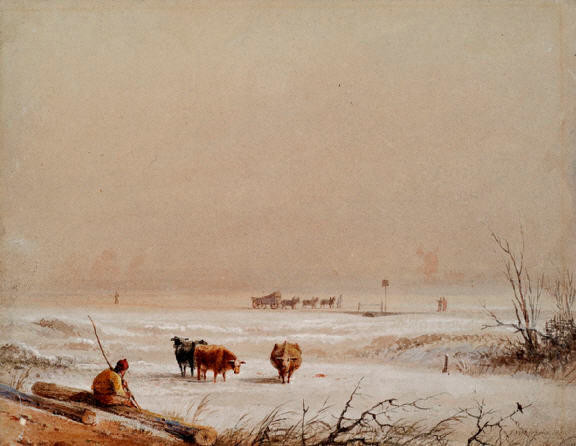