Rouen is a French medieval city and Thomas Cane has depicted its clock tower with La Rue de la Grosse Horloge running beneath. This picturesque architectural subject was very popular with watercolourists in the 19th century. Trained as a topographical artist, Cane was meticulous about reproducing small details accurately, but he also used a certain degree of looseness in his style, which gives the work an element of the picturesque. Born in England, Cane trained as an architect under Gilbert Scott. In 1873 he made a sketching trip to Normandy, Belgium, the Rhine Valley and France, focusing on well known architectural landmarks. Early in 1874 Cane arrived in Christchurch and in 1875 was appointed Canterbury Provincial Architect. Two years later the Provinces were abolished and he went into private practice. His designs include the Timeball Station in Lyttelton. Cane exhibited at the first Canterbury Society of Arts Annual Exhibition in 1881 and continued to exhibit with the Society through to 1900. 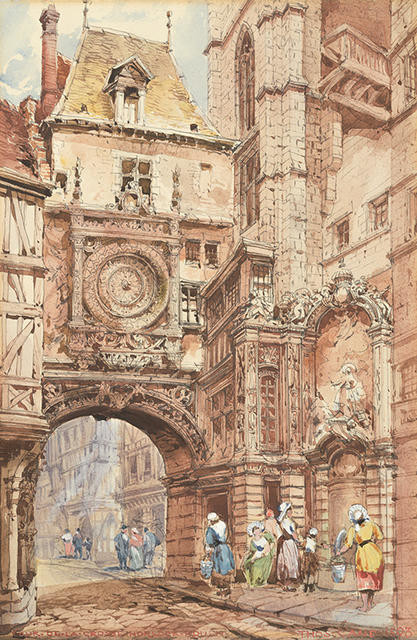