St Ives in Cornwall was a popular destination for artists interested in the plein air (outdoors) painting movement. Merton has captured the scene with well-judged watercolour washes, leaving a single layer of translucent paint where he wants to suggest the reflection of sunlight from the walls and roofs. This work, completed in the early stages of Merton’s career, shows the influence of the Post-Impressionist movement in its use of outlines, simplified surfaces and adjusted colour. The influence of James McNeill Whistler (1834-1903) can also be seen in the use of overall colour harmonies to achieve unity. Born in Christchurch, Merton studied at the Canterbury College School of Art in 1903, and in London in 1905-06. He returned to New Zealand from 1907 to 1909, holding a number of solo shows in Wellington and Christchurch. After that time he lived either in New York or in Europe. Merton was elected to the Royal Society of British Artists in 1910. He died in London. 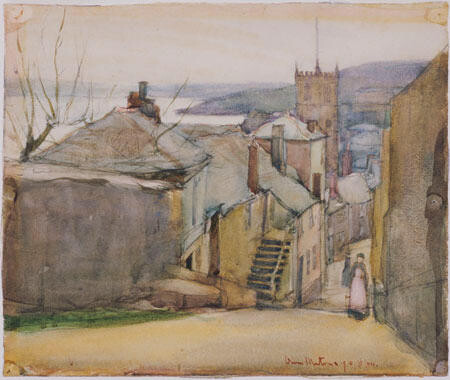