Thomas Cousins arrived in Canterbury around 1863 and was employed as a shearer by the Acland family at Peel Forest Station in South Canterbury for a short time. The Rakaia Forks is the name of the junction of the Wilberforce and Rakaia Rivers in the Southern Alps of central Canterbury. The rugged, mountainous scenery of the region provided the romantic imagery that appealed to Cousins.

Cousins was a popular figure in the Christchurch arts scene of the 1870s and 1880s. Little is known of his training but his father and uncle were established artists who would have encouraged his interest in art from a young age.

Cousins was born in England and was the son of the wood engraver Henry Cousins. He emigrated to Canterbury for health reasons around 1863, where he worked as a watercolourist and was also employed as a black and white illustrator. He was a founding member of the Canterbury Society of Arts and exhibited in the Society’s first exhibition in 1881. He moved to Dunedin around 1885 where he remained until his death. 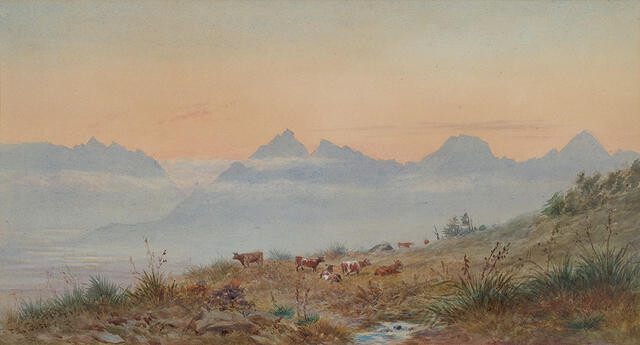