My work definitely has an aspect that concerns collecting. For a start I am interested in constellations of objects perhaps more than any individual thing, in the way that meanings of objects rub off on each other to create a world when they occupy the same field.

Accumulating objects is a part of everyday life. For a long time I have collected things from secondhand stores, objects that I find interesting for the way they are recirculated rather than thrown out. They retain some kind of transferable value. This is regardless or perhaps even because of something’s used-ness; I’ve noticed that an object that is cheap to buy new will be more expensive second-hand.

With old things there is a mystery about how they get to where they are in the world. Second-hand stores are interesting places to think about as a collection because they function as a diagram of the language of objects, how they fit in a space. They show the way groups of objects form sets or suites, how objects might help construct an identity.

My first purchase of an artwork was a Hotere Black Union Jack lithograph bought in the late 1980s, just after leaving art school, from the Brooke Gifford Gallery for a few hundred dollars. It was simply motivated by a desire to own a particular artwork I liked by an artist I respected. Later working part-time for the Brooke Gifford I had opportunity to look through the stockroom and spend my pay slowly buying early modestly priced works by artists I admired like Bill Hammond, Richard Killeen, and Julian Dashper. At the same time I also swapped my own work with Peter Robinson, Bill and others as well as looking for artworks at auctions.

What I collect reflects what I am interested in at a certain time. As well as art, I have collected old tin toys, rare books, photobooks, folk art, old Staffordshire figures and so on. These objects reflect an interest that may inform my own work or a curiosity to learn about particular objects by owning, handling and living with them. Sometimes the interest is constant, resulting in the collection growing, and sometimes it fades, ending that particular collection or evolving into a different area of collecting. Over the past 10–15 years my collection has changed alongside the growth of the internet which has made previously inaccessible overseas artists’ works, prints, photographs and photo books easy to obtain.

When I filled my apartment and still couldn't put everything up on the walls, I realised I had an art collection. Some collectors stop when they cover the walls with art but others keep going, finding ways to store it to bring out occasionally and happy in the knowledge that they own it. 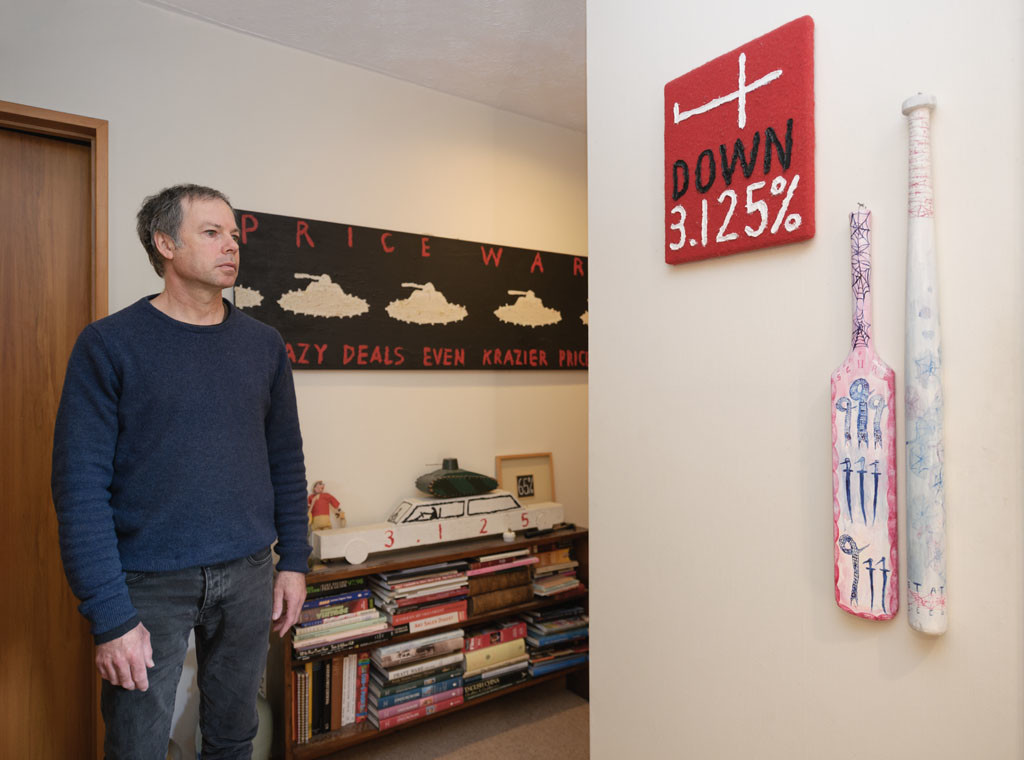 Our four children tell us art makes our house interesting. Fourteen-year-old Thomasin says, ‘My two favourites are Hell, by Ronnie van Hout, and the one of the Kiwi fighting the Lion by Tony de Lautour. It is New Zealand fighting the old world of England. When they come round my friends say, “Wow! What cool artworks!” I told my friend Lucy about the guns hidden in the trees in the Tony de Lautour painting and she immediately went to find them.’

We are interested in things that stimulate the eyes and the mind. Stuart and I do a lot of corporate coaching and I am an acting coach. We often rely on visual images to help actors and corporate performers understand. I send images of art to actors all over the world. Recently I have sent images of works by Tracey Emin, Sally Mann, Nan Goldin and William Yang. And I've also photographed artworks in our house as a way of communicating ideas about performance, such as Rose Nolan's Forever or John Ward-Knox’s video work Ellipsis or a watercolour by Michael Harrison.

Stuart has always collected art, ever since he was a student at Canterbury Uni. We have works by his ex-flatmates Ruth Watson, Martin Whitworth and Rudolf Boelee. From our theatre years we have a great work of Derek Cowie’s, Little Purple Girl. More recently we have collected Merylyn Tweedie, Ronnie van Hout, Tony de Lautour, Giovanni Intra, Neil Pardington, Robert Cherry, Julian Dashper, Rowan Wealleans, Francis Upritchard, and Shane Cotton . . . I guess these artists are of our generation and speak about things resonant to us. I hope our kids will find artists who speak to them in the same way.

I bought my first work, a Jeffrey Harris drawing, when I was eight. I still hold onto it as a symbol of ‘the beginning’.

Collecting art is not for the faint-hearted. It requires passion, courage, endeavour, constant vigilance and, most of all, a genuine love of art. Over the years, I have refined our collection. We now live with works that still surprise me and undoubtedly have an intellectual rigour. The many works that remain are characterised by the strength of the idea that underpins the work. When I look at a work, if ‘the idea’ lacks integrity in any form, the work appears one-dimensional and flat.

My primary reason for collecting art was always the joy it gave me. That hasn’t changed but I am now motivated more by supporting artists and buying works that are bold, interesting, and confronting, made by artists who don’t sit still for too long. A primary motivation for buying art now is that the work is an important work; that it is of genuine significance to the artist who created it.

Another joy has been bringing up a family, where our children are surrounded by art. I remember lying in bed on a Sunday morning and hearing a bump. Fin, our eldest, then aged six, emerged in tears—he’d knocked a Julian Dashper drum skin off the wall with a ball . . . no growling, just a reminder that balls and art are not the best of friends. As I write, Bradman, our Labrador puppy, lies on a Michael Parekowhai sculpture of an antelope. He’s found comfort in it since day one and will no doubt be climbing on and off it for years to come. Scratches can be repaired. Our house is a home, not a gallery! 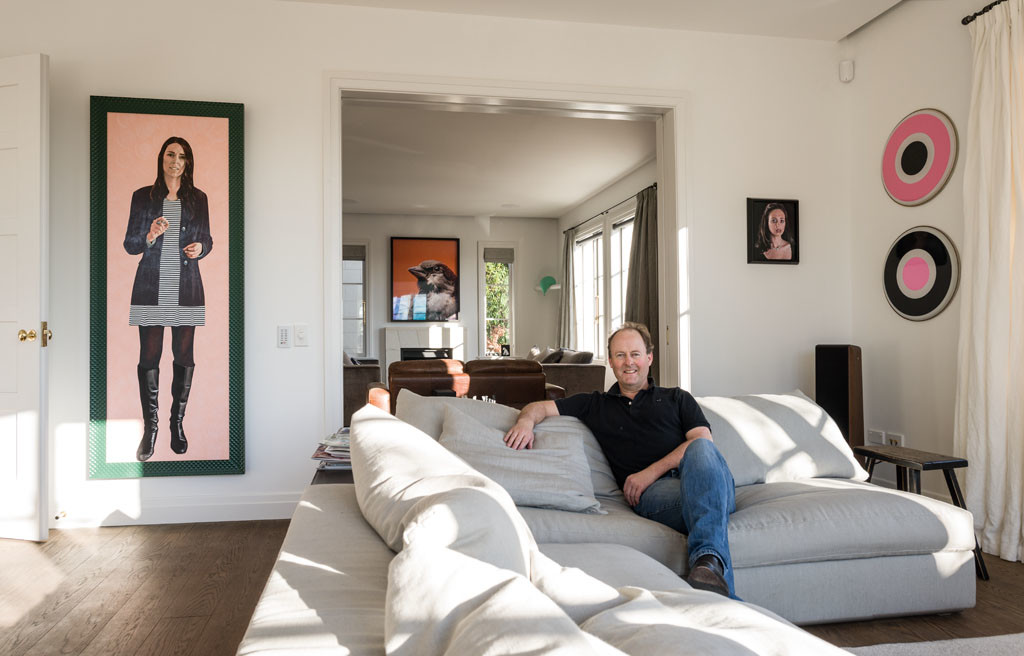 It is now more than forty years since we made our first art purchase. It was a print by Barry Cleavin, which was all we could afford at the time. It was in this exhibition that we first saw works by Hotere and Trusttum, and a few years later we went without a much needed kitchen renovation to make a major purchase of a work by Trusttum. We have never regretted this, and over the years the pleasure we have had from our art has reinforced our feelings.

We have made buying art a priority—our family mantra has been that you can always buy carpet, but art is a comfort for the soul. Love for the work has been our motivation to buy—we have never bought art as an investment. Our art is alive to us, and as we have got older it continues to stimulate and satisfy. We have found it rewarding to be able to share our art with others, and have been privileged to become friends with many of the artists whose works we own.

When did we become aware that we had a collection? Probably when insurance became difficult!

I wouldn’t call myself an accidental collector but at times artworks seem to accumulate rather than be acquired purposefully. Sometimes Nigel Buxton or I swap something with a fellow artist or we are given a work. Sometimes I buy something for the simple reason that I want to look at it longer—artworks don’t always reveal themselves on first viewing. There are times, however, when I buy a piece out of a distinct desire to possess it—I already think of it as mine before I’ve handed over the money. Nigel and I rehang the walls at home often. Sometimes the walls are sparsely populated, other times they are dense.

Aside from paintings, prints and drawings by living artists I own a large collection of eighteenth and nineteenth-century engravings, many relating to Captain Cook’s voyages and the colonisation that followed. Owning these prints seeded ideas that emerged in my own work and it has been fabulous studying the real things without glass and being able to do so whenever I like. We also own etchings by Piranesi and Callot amongst others.

I realised I would be a collector soon after I left art school and I recognised I had a collection when it no longer fitted on the walls. 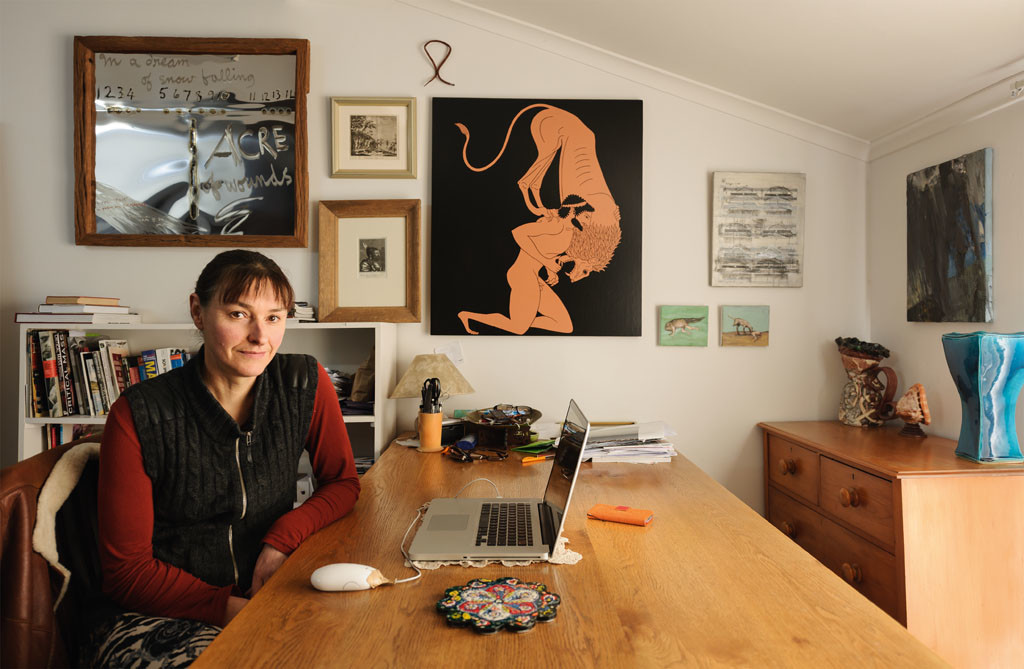