When the Artzheimers group visits Christchurch Art Gallery Te Puna O Waiwhetū the members are are stimulated, not just by the paintings on the wall, but also by the caring presentations they hear from curators and guides.

The Artzheimers name reflects the group’s connection to the arts, and the impact that diseases of the mind such as Alzheimer’s and dementia can have on senior citizens.

Artzheimers is a collaboration between the Gallery and Dementia Canterbury, and the group visits the Gallery to learn about works including those in the historical collection, which is sponsored by Ryman Healthcare.

When Ryman creates its villages, it includes sensory aids and living area designs to help those with Alzheimer’s and dementia to connect with the world around them. What the gallery offers, fits right in with the Ryman ethos of improving the lives of the elderly.

For me, the recent Artzheimers trip to the Gallery was an eye opener. Education and Public Programmes team leader Lana Coles and guide Sara Newman interpreted some of the art works with the older citizens, and provided commentary to provoke memories and feelings for the visitors. The group was spellbound.

Director Blair Jackson was on also hand to talk about the Gallery’s role as a positive catalyst within the community. The Artzheimers programme has been managed by Lana and Dementia Canterbury for about six years, he says.

It began with outreach programmes started during the post 2010–11 earthquake recovery period when the Gallery was closed to visitors for earthquake remediation. The gallery took some art works, and copies of works, out to public spaces including Christchurch South library to engage with the public. At that point those with dementia, supported by Dementia Canterbury, started viewing the art.

There was an advantage to using copies at this point, Lana says. “The works were mounted on boards so they could be passed around, held, touched and generally be much more accessible. The tactile thing was very important and it was lovely to see participants responding so positively.”

Since the Gallery reopened in December 2015 the Artzheimers visits, to view both historical and contemporary works of art, have provided an outlet for many. The guides that present to the Dementia Canterbury Artzheimers group have been trained on how to relate to and engage with those with dementia.

“It is much better for them (at the Gallery). It’s the real thing.” Lana says. The idea of Artzheimers had been based on the Museum of Modern Art in New York’s Alzheimer’s Project.

“We’ve got a policy of accessibility and inclusion to all parts of the community, and I thought this is something, especially when we’re closed, something we can do. And it’s been very successful.”

Lana adds she is aware that those in the group want to live well and have taken up other community tasks such as ‘potting up’ plants within the Christchurch Botanic Gardens and have also been active within theatre and symphony orchestra groups.

The morning session I attend at the Gallery opens with a version of folk singer and social activist Pete Seeger’s ‘Turn Turn Turn’, a song written in the late 1950s. And like countless times over the years, the session results in humour, laughter and engagement from those within the Artzheimers group.

When Gallery guide Sara Newman talks to the audience about the meanings and memories that can be attributed to works in the heritage collection the group comes alive with answers to her questions. Their commentary about paintings reflects gardens, sunflowers and the changing of the seasons. An Evelyn Page painting of Road through Arrowtown is perhaps a reminder of the onset of autumn? Can you see the faint sunlight as it slips through an avenue of trees?

This socialising and stimulation, keeping minds active over an hour session with something fresh and new, has proven results. “They can stay ‘up’, for about three days afterwards,” Lana says. “And the sessions are light, they’re fun, I mean it’s not heavy art theory we’re giving them.”

Blair Jackson says the Gallery has benefited from a long-running relationship with Ryman Healthcare, and is grateful for the partnership. Originally based on the display of historical works, Ryman are also now supporting the Gallery’s public programmes. 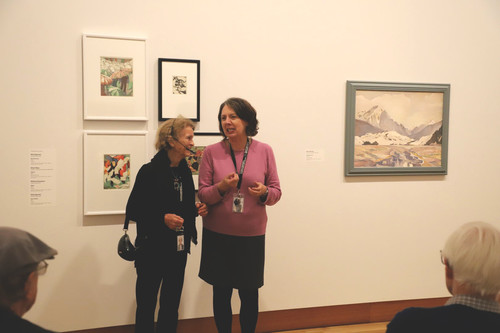