This article first appeared as 'The fine juggling act to create his artwork' in The Press on 8 June 2017. 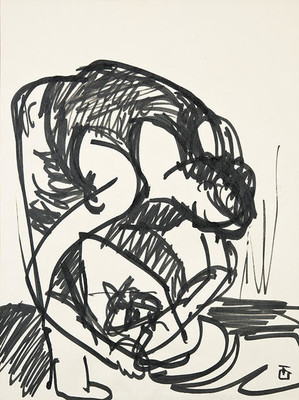 The Dictionary of New Zealand Biography entry for ‘Woollaston, Mountford Tosswill’ claims him as ‘Artist, orchardist, salesman’. It’s an aptly multi-faceted categorisation for a painter who juggled his lifelong love of art with the unrelenting need to make a living.

Woollaston (1910 – 1998) was born in the small settlement of Toko, Taranaki. The eldest of five sons in a family of share-milking dairy farmers, he had no fondness for farm work, instead choosing to follow the “thrilling, silent life” of an artist, first as a poet and then as a painter. After brief art schools stints in Christchurch and Dunedin, Woollaston set out to forge his own path. Settling with his wife Edith at Mapua, near Nelson, he secured work as an orchardist, combining this with the development of a modernist, largely landscape-based practice. His work remained determinedly individual, but supported by friends such as artist Colin McCahon, poet Charles Brasch and Christchurch public librarian Ron O’Reilly, he increasingly found audiences for his paintings. In 1949, to meet the demands of his growing family, Woollaston accepted a dealership in Greymouth with the W.T. Rawleigh Company. Established in the United States in 1889, Rawleigh’s specialised in a wide range of home-delivered health and household products. Introduced to New Zealand in 1931, their products and travelling salesmen became a familiar sight throughout the country.

Gradually, Woollaston’s career gained momentum. He operated a “delicate but workable economy”, selling paintings, often in person, and picking up occasional grants. This allowed him to exhibit annually in Christchurch and Wellington, making enough for the family to live on while he painted during the summer. “This mania for selling is simply so that I can buy time to paint, the commodity I most desire & have most difficulty in securing”, he wrote to Brasch.

In 1961, Woollaston received an Arts Advisory Council grant to visit European art galleries. Initially, he was a reluctant traveller, trying first to convert the £1000 award into three annual payments of £300 to enable him to spend more time in his Greymouth studio. “The answer that came back was unrelenting – if I hadn’t gone overseas by 1962 at the latest, I would forfeit the grant. So I had to go. I couldn’t afford to miss the enhancement to my reputation, with the hoped-for resultant increase in sales”, he wrote later. Letters reveal frantic attempts to tenant his house and arrange money for Edith. His desire to make the most of the experience was tempered by the risk of jeopardising his flexible employment arrangements. “Rawleighs’ patience might extend to seven months where nine might break it. Don’t pooh-pooh the job. It is the only one I could have where I could go off for 3 months at a time twice a year to paint…” he explained to Brasch. In the end, he spent nearly four months overseas, basing himself in Madrid, London and New York.

While away, Woollaston spent a weekend with Janet and Geoffrey Moorhouse at their home near Manchester. They had met in Greymouth, where Geoffrey had arrived from Britain in 1954 as a young journalist. He met Janet, and they soon struck up a friendship with Toss and Edith. Ever the salesman, Woollaston brought along two artworks on his visit and they purchased both, including this drawing of the artist’s youngest brother shearing, made earlier that year at the family farm in Taranaki. Worked quickly in ink, with rapid adjustments made on the page, it is vividly rendered. With one foot planted firmly on the boards, the shearer’s arms and body curve around the sheep, describing an arc that is both muscular and lyrical. Geoffrey Moorhouse, who became a leading British travel writer, died in 2009, leaving this drawing to his children. They presented it, in person, to the Gallery in his memory in early 2011 and it is currently on display in the exhibition ‘Beneath the Ranges’.