This article first appeared as 'Painting's fascinating life mirrors subject's ' in The Press, 15 May 2017.

25-year-old Samuel Butler arrived in Lyttelton in January 1860. In the next four-and-a-half years, he managed to both double his capital as a Canterbury high country sheep farmer and start writing Erewhon; or, Over the Range – the fantastical novel that would establish his reputation. Butler made regular visits to Christchurch from ‘Mesopotamia’, his remote Upper Rangitata sheep station, and was sometimes hosted by the subject of this portrait, John Parker Marshman and his wife Caroline. Later, Butler would be proudly remembered as having ‘played on the Marshman piano, painted in the dining-room, and walked in the Marshman garden.’ Butler’s pared-back portrait of his friend is dated 1861, the year before Marshman left Christchurch to become the Canterbury Province’s London-based Emigration Agent.

John Marshman was a 24-year-old surveyor from Bristol when he reached New Zealand, shortly after the major 1848 Marlborough earthquake, and was set to work sketching Wellington’s damaged buildings. Under the employment of Captain Joseph Thomas, he also did surveying for the Ngauranga Gorge and the Canterbury province, whose location was selected in April 1849 by Captain Thomas on vast tracts of land purchased from Ngāi Tahu in 1848 by the New Zealand Company. (For a scanty sum of course, in a notorious transaction known as the Kemp Deed.)

Marshman was among many who sought opportunity in Canterbury. Taking up long-term employment with the Canterbury Provincial Government, he settled firstly in Lyttelton and married there in 1851. His earliest roles included provincial treasurer and auditor – and from 1854 the Registrar of Brands for Sheep. He also started farming at this time on land acquired on the Lincoln road near the Wilderness Road (later Barrington Street) and at Mount Grey, and became a thoroughly experienced colonist.

Samuel Butler and John Marshman both wrote books useful to prospective settlers. Butler’s A First Year in Canterbury Settlement was published in England in 1863. Marshman’s Canterbury, New Zealand, in 1862 and Canterbury, New Zealand, in 1864 were also published in London. Marshman’s role as Emigration Agent involved screening the suitability of settlers and overseeing the fitting out and construction of emigrant ships. His books advised on the realities of settler life, from weather to the price of crockery, what to bring and what to leave behind. He also described geography, population centres, natural resources, land regulations and agriculture and prices of stock, seed and staple supplies. Advising on ‘What Sort of People ought to Emigrate’, he also dealt with ‘Discontent among New Comers’, ‘Description of Men who may count with certainty upon obtaining Employment’, and ‘Single Women, what description most needed’. Assisted Passage was ‘restricted almost entirely to Agricultural Workmen, Shepherds, and Women Servants’.

Marshman left London to become Canterbury’s first general manager of railways in 1868. He lived in different parts of Christchurch and died in 1913. Marshman and his family were separated from this portrait for three decades: ‘During one of the upheavals in the shifting of many possessions the portrait was put out among some lumber to be given to a daily charwoman. Thirty years afterwards, one of John Marshman’s grandsons identified it, hanging, smoke-blackened, above the fireplace of a fisherman’s hut at Redcliffs. Promptly he bought it from the fisherman…’ It entered the city’s art collection in 1996. 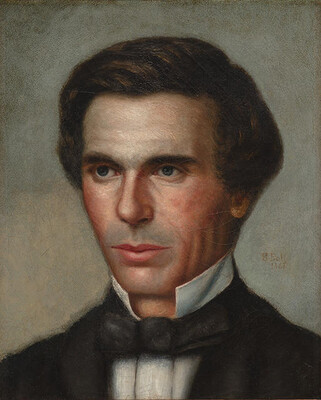