This article first appeared as 'Mulling matters of inequality' in The Press on 3 February 2015. 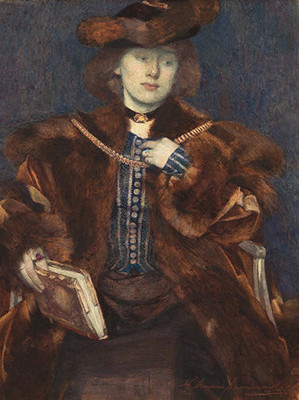 Gertrude E. Demain Hammond (1862-1952) was a London artist whose work was often singled out for praise when exhibited from the late 1880s onwards at The Royal Institute of Painters in Water-Colours and the Royal Academy, where this watercolour painting was first shown in 1903. Elegantly dressed in her finery and furs, a regal young woman places a bejewelled finger in the book she is reading, pausing to consider matters profound. Within the vellum-bound volume are the writings of Plato, so we might speculate that she is weighing philosophy, political theory, metaphysics, the origins of art.

Or were there more pressing concerns? It is worth noting that Plato's writings were quite often corralled into discussions about sexual equality that were alive at this time. And it seems relevant to note that when this painting was made, although New Zealand women had been voting for a decade, British women would not have full voting rights for another 25 years. This painting, beyond the subject's undisputed elegance, seems to quietly assert that it is her intellectual depth and capacity for contemplation that matters.

Gertrude Demain Hammond was also a prolific illustrator for London publishers, illustrating popular Christmas books and a variety of London journals and periodicals, including The Yellow Book in 1895. She was no stranger to discrimination in this field, typically signing her work 'G. Demain Hammond', thereby occasionally receiving equal payment as a man would receive; her sister Christiana, another illustrator, achieved this by signing herself 'Chris Demain Hammond'. From 1892, the sisters were among the few female illustrators for The Idler, until the journal was taken over in the following year by Jerome K. Jerome (of Three Men in a Boat fame), who almost immediately stopped giving commissions to women.

Even after her marriage in 1898, Mrs Henry McMurdie (as she became known) continued to exhibit and have her book illustrations published under her unmarried name. The couple lived at St. Paul's Studios in Hammersmith, said to have been something of an artists' colony. She died in Worthing, Sussex at the age of 90 in 1952.

A Reading from Plato is one of Gertrude Demain Hammond's most impressive works, and makes one wonder why she is not better known. It came to Christchurch for the 1906-07 New Zealand International Exhibition as one of a vast collection of British works of art, including 350 watercolours and 250 oil paintings, and was purchased there by the avid local art collector James Jamieson. James with his brother William ran one of the leading construction companies in Christchurch (they were responsible for building the Cathedral of the Blessed Sacrament, Barbadoes Street; and the Government Building and The Press Building, both in Cathedral Square). Following his death in 1927, many works of art from his collection were given to the city to become part of the Robert McDougall Art Gallery's founding collection, which when it opened in 1932, consisted of just 160 paintings and sculptures.

As the McDougall's successor, Christchurch Art Gallery now holds over 6500 works of art, and we're looking forward to bringing out as many of these as we can – including this gem – for our reopening, we hope at the end of this year. 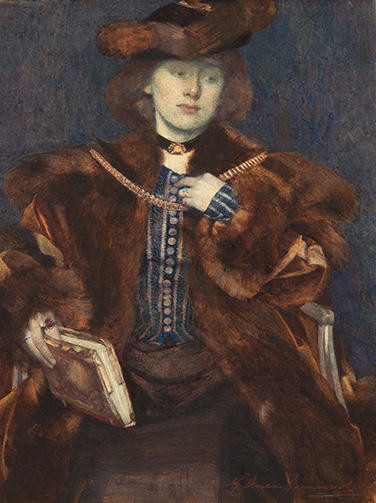 Gertrude Demain Hammond was a prolific book illustrator whose formal art training began in 1879 at the Lambeth School of Art, alongside her sister Christiana, and continued at the Royal Academy Schools from 1885. She first exhibited in the academy’s prestigious annual summer show in 1886. In 1891 she sold a painting from the Royal Institute of Painters in Water Colours to the Empress Frederick of Germany – Queen Victoria’s eldest child, Princess Victoria – and in 1896 was elected to the institute. Gertrude and Christiana were recognised in the 1890s as Britain’s leading women illustrators. After Gertrude’s marriage in 1898, the sisters lived and worked from the same address at St Paul’s Studios, Hammersmith – a grand suite of Arts and Crafts studio apartments established as an urban artists’ colony.

A Reading from Plato was shown at the Royal Academy in 1903 before being sent to Christchurch for the 1906–07 New Zealand International Exhibition, where it was purchased by local art collector James Jamieson who, with his brother William, ran one of the country’s largest construction companies.