A topical (or recently topical at least) work from our collection today, from none other than William Hogarth. 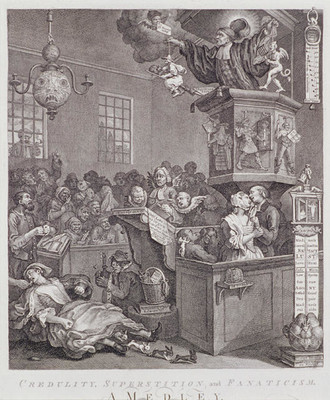 Topical because today we got to read on front page of the Press's World section, about Andy Coulson, and Rupert Murdoch's protégé Rebekah Brooks, one of whom has of course just been found innocent of phone hacking. Also on the front page we read (in an article syndicated from Murdoch's The Times...) that 'Victims not so honest after all'. This all encompassing headline is followed by 'One by one, their stories were placed before the jury as examples of the worst kind of press intrusion. One by one they were dismantled.' While undoubtedly true in a number of cases (even if rather missing the point about the legality of hacking their phones), it seems crudely triumphant and crowing when you remember that the victims of the case include the parents of murdered school girl Milly Dowler.