Here's a little extract from a talk Shane gave with Justin Paton back in 2012.

Justin Paton: On the one hand you seem to hold out the lure of something to read, but, on the other, this red skywrit­ing is very hard to read. It's often in another language, a language many viewers won't understand. There are layers; the words fade out raggedly. Why is it important to make it hard for us to read?

Shane Cotton: If you look at a McCahon, his use of text was very much about the idea of read­ing a painting—he wanted you to read it. I don't. The text in my work is more like an interference pattern. There may be keywords—for instance, the text in many of those works is from the Book of Job; it's at the beginning and God and Satan have a conversation, they have a wager. Satan says, 'You know, I reckon if you give this guy a hard time he's going to come over to the dark side.' But before that God says to Satan, 'Where have you been?' And there's this lovely series of sentences where he describes how he's been drifting through earth, walking through the earth and walking through the sky, toing and froing in the earth. If you consider how, as a Māori person, you might think about the land, you quite often tend to personify it through its name. And if you think that something bad is wandering though you, it's some­how affecting you. I've always thought that kind of creepy. I'm interested in that piece of text so I painted it in English and then I painted another one, which is the Māori translation. I've given them the same treatment – I use words like an image. I want them to operate like the birds or the clouds but at moments you can make out a word – you might make out the words 'Satan' and 'earth'. You might see the words coming to you, from you, through you. I'm alluding to the possibilities of something else instead of demanding a literal reading 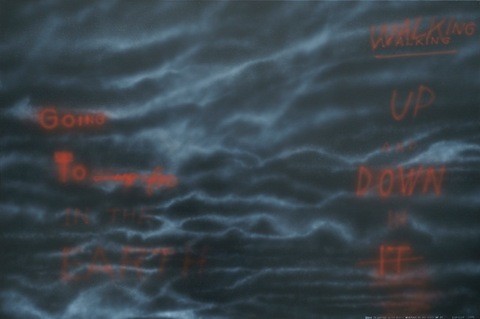 Shane Cotton Going To and Fro. Walking Up and Down In It., 2009. Acrylic on canvas. Courtesy of Michael Lett and Hamish McKay Gallery

If you want to hear Shane talking yourself, he's giving a floortalk at 209 Tuam Street on Saturday morning at 11am. But get there early - it's going to be busy.

Christchurch audiences at last have the opportunity to experience the complexity and ambition of Cotton's latest work in this two-venue exhibition by one of the biggest names in New Zealand art.