Sir Toss Woollaston (1910-98) seldom painted urban landscape, and is best known for his characteristically energetic, atmospheric fusion of natural earth, water and sky. Greymouth with Tower is one of a small number of paintings dating from the 1950s painted from the elevated vantage point of his Greymouth home. 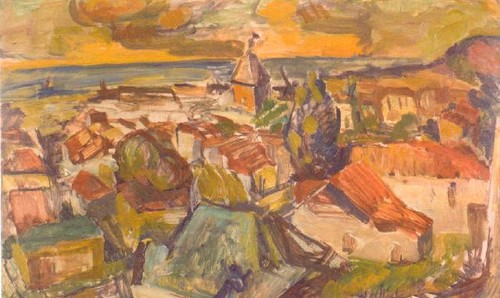 Toss Woollaston, Greymouth with Tower, 1952. Oil on ivory board. Purchased by the Friends of Christchurch Art Gallery, 2007

In December 1949, Woollaston moved from where he and his family had been living in Mapua (near Nelson) to Greymouth, in order to support his family in employment as a 'Rawleights man' – a travelling door-to-door salesman of health products and ointments. He started out there boarding with a family, then was joined by his own family a few months later. Toss and Edith Woollaston stayed in Greymouth until 1968.

5 December 1949 (Toss Woollaston writing to Edith on the day of his arrival): 'Greymouth, in from the river, looks a crowd of grey churches & buildings at all angles, with high green & bushy hills just as sharp & angular rising behind – not mine yet.'

9 December 1949: 'I think I shall end up by painting the West Coast, perhaps with great violence in subdued colour by the look of today's effort in watercolour.'

14 January 1950: 'When I settle down from the excitement of the new occupation I'll be better able to grapple with painting here. I like Greymouth more & more.'

'In mid-April Toss bought a wooden villa at 33 Kilgour Road, on a steep hillside section. (...) The purchase was financed by the sale of the Brasch-funded Mapua property and a loan from Toss's father.' From Toss Woollaston, A Life in Letters, Edited by Jill Trevelyan, Te Papa Press, 2004, p.180

24 May 1950 (to Charles Brasch): 'So far I cannot paint successfully in Greymouth: both the time required to assimilate a new landscape, & my unsettled domestic life, have no doubt been causes.'

'By June 1950 the Woollaston family was settled in Greymouth. Business and domestic concerns took priority during the following years and Toss found little time for art – or letter-writing.' From Toss Woollaston, A Life in Letters, Edited by Jill Trevelyan, Te Papa Press, 2004, p.182.

Edith Woollaston to Charles Brasch, 17 September 1952: 'Toss himself seems swallowed up in his endeavours to make enough money to pay for the essentials ... he scarcely ever thinks writes discusses or reads as he used to in Mapua & only has time occasionally to paint or begin to think painting; - there is no time & energy for anything else ...'

Though the early 1950s were difficult years for Woollaston, with little time to devote to his art, he still managed to show regularly with The Group over the next few years. The 1952 show in Christchurch, in which this work was shown, ran from 25 October – 9 November. He also exhibited occasionally at this time with the Westland Art Society in Greymouth. In 1952 four of his works were also included in the exhibition 'Fifteen New Zealand Painters' at the Irving Galleries in London. 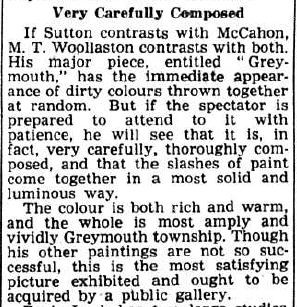 A review of the 1952 Group Exhibition at Durham Street, written by Christchurch City Librarian Ron O'Reilly (a friend and early supporter of both Woollaston and McCahon) judged this painting to be the artist's strongest work in the show. It is interesting to note his view that it 'ought to be acquired by a public gallery'.

55 years later the painting was purchased for the collection by the Friends of Christchurch Art Gallery.

[Thanks to Philip Woollaston and Jill Trevelyan for permission to reproduce quotes from Toss and Edith Woollaston's letters.] 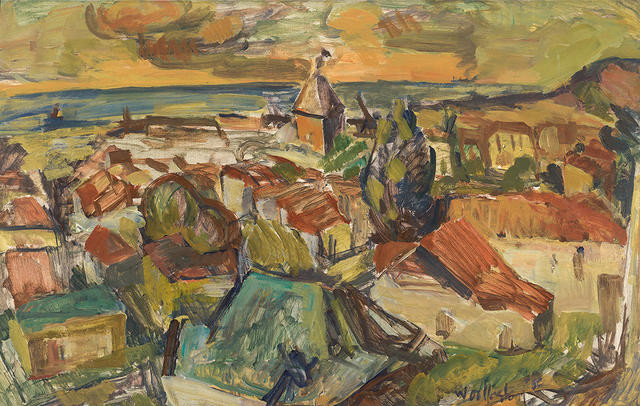 Toss Woollaston arrived in Māwhera / Greymouth in 1949. He wrote of the town, “Greymouth… a crowd of grey churches and buildings at all angles, with high green and bushy hills just as sharp and angular rising behind – not mine yet.”He purchased a house on the hill above the town, and painted this work for the 1952 Group exhibition in Christchurch – a view from the front verandah looking out to the Tasman Sea.