Back off everyone. The Cathedral will be demolished. You're welcome to as many thoughts and opinions as you like. Any more bids? Thank you sir, we won't see that one either. The bids are closing. Last chance. Anyone else want to throw in an opinion? Going, going, gone.

So what is it exactly with the plan to demolish the whole thing until it's down to a uniform two to three metres, the apparently 'safe' height that has been repeatedly voiced? Did someone just think that up for convenience? It seems more than arbitrary.

It also seems obvious that adding any more words to the conversation is futile. Already the voices of many remain resolutely ignored. But isn't there any way in which just a little bit more could be left behind than a low stone wall? Couldn't we be left with something slightly more inspiring - something noticeably higher and more interesting than your average suburban backyard fence? If the two to three metre plan goes ahead, will any self-respecting architect really be comfortable with attempting to build something major, new and inspiring that could marry with this weird remnant? Can such an idea make any shred of sense? 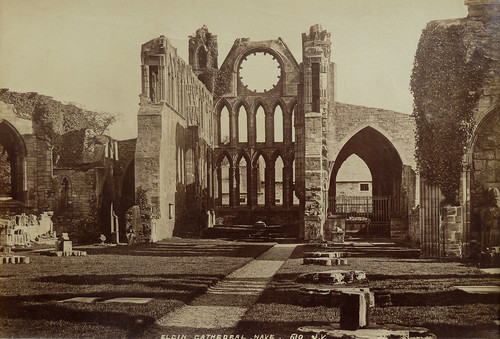 Part of the problem, probably, is that there are no precedents for these sorts of things in this part of the world. We have little mandate let alone ability to preserve or create 'tasteful ruins', or at least nothing with any real teeth, as we now clearly know. It also seems impossible that our local church, government or civic administrators could now suddenly start themselves thinking along such lines. But even if they could, how would a hypothetical planner approach the task of art directing aesthetically pleasing (and tourist attracting) sculptural architectural remains? It's possible that the idea is tinged with kitsch – but acknowledging that, it also has quite a lot to recommend it. (See 'Surviving History', B.167, autumn 2012.)

Is there anything wrong with the example of Elgin Cathedral, seen here in an 1870s photograph? Neatly grassed, climbing ivy, a path, walls open to the skies? There's no need to be a neo-Romantic poet to appreciate the thing happening here, plenty of invitation for contemplative musing... Yes, of course it's the kind of thing that visitors would flock to see.

Let's imagine. Cathedral administrators decide to build somewhere else nearby, and to release the land and building remains to the city. A polite phone call to someone clever like Sir Peter Jackson: 'Would you mind nurturing this beautiful pile of rubble into something a more useful (and safer), keeping in mind the need for a good few spectacular vantage points?' 'Yes, we can do that – a little bit more off there, please. Moving around now – ah yes, keep that bit. Very nice. Keep going. A bit more nibbling over there. Mind the windows – we can do something with those. Yes we can strengthen those bits – not a problem. Good – it's coming along nicely. Not so difficult. And definitely cost-effective.'

(NB: This is just my opinion, does not reflect any official position from any particular organisation, etc., etc....)