Every city with character has its own colour.

Berlin, for instance, hangs in my memory as a place of low white skies and steely greys, while Sydney, by contrast, is sandstone yellow with glitters of blue beyond.

If pre-quake Christchurch publicly identified with one colour then it had to be green: the colour of 'The Garden City' and willows on the Avon and lawns lawns lawns (rhymes with yawns). And what everyone's hoping for in the Christchurch of the future is greenness of a more meaningful hue: an eco-city bristling with rooftop gardens, biofuel pipelines and smiling cyclists on collapsible bikes. (We'll see.)

In the meantime, though, the inner city has a new and distinctive palette. I'm talking about the dust of pale grey and pink that cloaks so many cleared sites, the greys derived from pounded concrete and the pink from shattered bricks.

And most striking to me, the undercoat colours revealed by so many demolitions - sunlight soap yellows and hospital greens that suggest the interior decorating habits of an earlier time and which seem, in the harsh setting, touchingly soft and 'tasteful'. 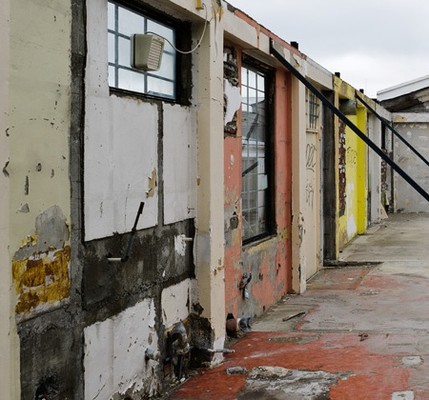