These are truly strange days for art in Christchurch, and for public art especially.

With so much demolition occurring all around us, and with so many normal art venues out of action, there's a powerful wish – it sometimes feels deeper than that: a need – to see art play its part in the so-called 'transitional city'. How might art show the way to a better future? How might it help to revitalise and revive? At times it has felt like sitting through one long and ardous brainstorm session, where the mood see-saws constantly between wide-eyed optimism and fits of the glums while Post-its flutter hopefully on every wall. There's talk of culture districts, mobile galleries and rivers of art; of monuments, memorials and more. And already there are things to see. The brilliant Gap Filler project demonstrates how well things might go; the dreadful 'lights of hope' show how badly (note to whoever is swinging the lights around like that: please stop – it makes the city look like an apocalyptic disco).

But it will be a very long time before anything resembling a traditional monument or memorial makes sense in Christchurch. For public art of that kind to do its thing, it has to have a steady backdrop to stand out from. But steady ground is the last thing you'll find in Christchurch at the moment, because the ground has moved – and is still moving. The catharsis and 'closure' implied by monuments are all wrong for this moment, when the prevailing emotion city-wide – at least as I feel it – is not sober retrospection but some persistent mix of resignation, irritation, grief and ever-so-tentative hope. And then there's a strange but simple physical fact to contend with, which is that the city as it currently stands is its own memorial. The usual function of a memorial is to commemorate what's not there. But physical evidence of what we want to remember is still spectacularly with us; it is exactly what all those people walking the edge of the red zone have come in to the city to witness. There's not an art object out there that can compete in eloquence with all the instant ruins on view in the city – the walls, columns and other remnants left standing at the end of one day's work, and often gone before the next day is done.

The most telling monuments in Christchurch at this time are found, accidental, and emphatically temporary. They haven't been put there in response to the earthquakes and demolitions, but revealed or somehow brought to prominence by them.... 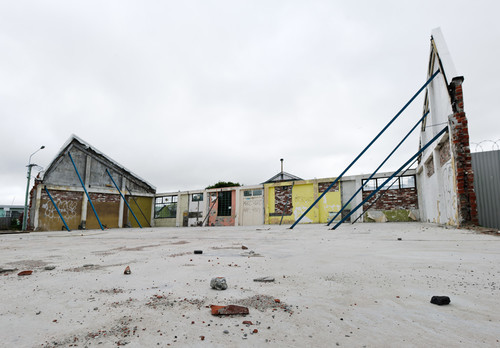 (This is an except from an essay titled 'Here and gone: Public sculpture, the art of memory, and the ghost ship of Ferry Road'. It's in the new issue of Bulletin, which you can see more of right here.)