The Pruitt-Igoe social housing development in St Louis, Missouri is often held up – or beaten down – as the case of modernist social housing gone bad. 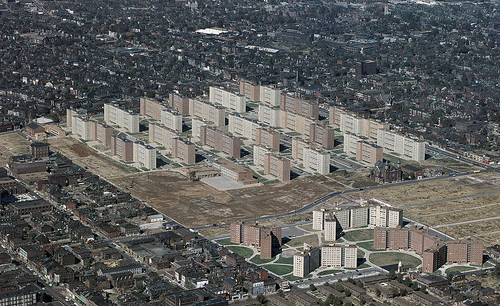 I first heard about it in first-year art history, when we were shown a speckly videotape of the 'Trouble in Utopia' episode from Robert Hughes' series The Shock of the New. As the camera panned across buildings as bleak and lifeless as tombstones, Hughes described the troubles (neglect, terrified oldsters, teens in the stairwells with flick-knives) that engulfed the colossal housing project from the moment of its completion in the mid-1950s all the way through to its eventual demolition in 1972, when it was not much older than our Hotel Grand Chancellor is today. That implosive moment was famously nominated by historian Charles Jencks as marking the death of modern architecture.

Having just yawned my way through the fawning and toothless architectural documentary Sketches of Frank Gehry, I've made a note to seek out the new and much-praised doco The Pruitt-Igoe Myth: An Urban History. Directed by Chad Freidrichs, the film sets out to unravel the notion that either modernism (with its supposedly pie-in-the-sky dreams of social improvement) or the residents themselves (with their supposed failure to value and look after their sparkling new home) were to blame at Pruitt-Igoe. Like another epic account of urban blight recently mentioned on this blog, the film locates a moment of architectural failure in a far larger social setting – one where white flight, suburbanisation and dodgy civic management all played their lamentable part.

I'm hoping Alice's add this one to their pretty damned fine selection of films about buildings before too long. And, naturally, I'm also hoping the much-missed Alice's building itself, currently in Grid 17 of the Red Zone, gets to open for physical business before too long.