This touring exhibition comes from the collection of the Institute of Cultural Relations in Stuttgart, Germany. Curated by Werner Spies, a major Ernst scholar, it brings 196 original prints, rubbings, collages, photograms and lithographs and 26 books either written by, or illustrated by the artist. A truly comprehensive coverage of Ernst's graphic work.

Born in Germany in 1891, Max Ernst began painting when he was aged 14 and at this time he was strongly influenced by the Blaue Reiter artists of pre-war Germany. Later he worked with the cologne Dada group who expressed their disillusionment with post-war society by emphasising absurdity and the working of chance.

Disowned by his family for his provocative activities, Max Ernst moved to Paris in 1922 and eventually collaborated with the writers Paul Eluard, Tristan Tzara and André Breton in the founding of the Surrealist movement. Less negative than Dadaism, Surrealism brought together images from daily life with those from dreams or the subconscious. The attempt was to create a 'super reality'.

But there were other graphic techniques to be worked out by Ernst during his long working life. Although they are quite readily accepted by artists of today, in the early decades of this century Ernst's materials and methods were usually at variance with those used by his contemporaries. Amongst them were collage and frottage works represented here in a number of his very influential books.

In Max Ernst - A Surrealist Eye we see his 1934 masterpiece Une semaine de bonté represented here by 18 images. Displaying the range and depth of his epoch-breaking collage work the collages were based on the free association of ideas and the interpretation of dreams. In the early 1930s the images showing weird juxtapositions, and the unnatural welding of human and other forms, would have horrified and unsettled contemporary viewers. Today we still need to be reminded of the futility of trying to establish a logical narrative thread with these works. To attempt to do so will destroy the deliberate, suggestive 'trace' Ernst has struggled to create.

Brought on tour by Exhibitour NZ with the support of the Goethe Institute and New Zealand Van Lines Max Ernst - A Surrealist Eye is an intense, demanding and challenging show. 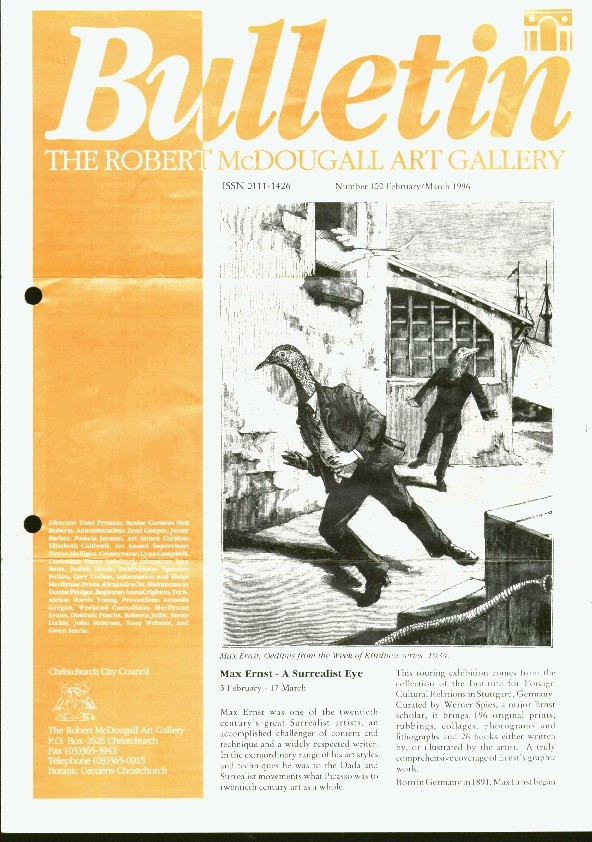