Best known for his sepia-toned photographs of the New Zealand rural landscape in the 1920s and 30s, Chance (1885-1963) was the most popular photographer this country has known. He sold over 30,000 prints in his day and most found their place on the walls of New Zealand homes. Chance came to New Zealand in 1909 to work as an optometrist for the Dunedin firm Dawsons Limited and brought with him a considerable knowledge of cameras and photography. He bought his first 3d camera as a London schoolboy and with it, and the more sophisticated cameras to follow, Chance found the means to express himself creatively.

In 1902 he worked for photographic manufacturers and suppliers. Three years later he joined a Regent Street firm which sold not only cameras, but taught clients how to use them and served as a studio and darkroom for the very fashionable.

In 1906 he left to join a treasure hunting expedition to South America as the photographer/secretary. On his return to London he trained as an optometrist, and so to Dunedin, New Zealand.

Although optometry, and Dawsons Limited, remained his career to the end of his life, it was his dedication to photography which yielded his greatest success.

The exhibition charts this success and 40 images attest to his considerable artistic skill. Many visitors will enjoy the delights of rediscovering old favourites, others, for whom Chance's pictorial style represents a best forgotten period in New Zealand's photographic history, will find themselves admitting his perceptive skill and reappraising his interpretation of the landscape.

All the prints in the exhibition have been lent by the artist's son – Mr George R. Chance – also a respected optometrist and photographer. The exhibition was organised by the Dunedin Public Art Gallery with the assistance of the Queen Elizabeth II Arts Council of New Zealand. The national itinerary 1986-87 was organised by the New Zealand Art Gallery Directors' Council. To accompany the exhibition the Gallery has published, with the assistance of the QEII Arts Council of New Zealand, a fully illustrated catalogue featuring an essay by Wellington expert William Main. 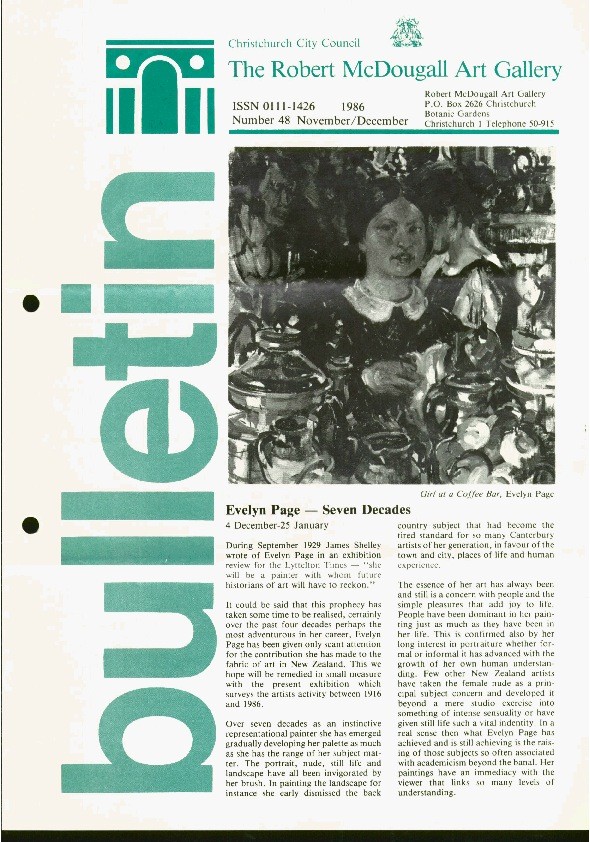