With Spirit: Don Driver A Retrospective

A major retrospective of New Zealand's most significant assemblage artist.

Alchemy
When Marcel Duchamp 'created' his ready-mades the art world was revolutionised. The object was accorded a power of its own and the authority of the artist to proclaim what was art became ultimate. Yet Don Driver's assemblages transcend the original function and identity of the objects from which they are composed. The process by which they are transformed seems to have tapped the surreal subconscious and, like Pollock's drip paintings, evoke a sense of pattern and of meaning, which can be intuited more easily than it can be described. To call the objects 'found' or 'recycled' is to diminish their transformation at the artist's hand. As Elva Bett writes in New Zealand Art: A Modern Perspective, 'There are metaphysical ambiguities in his work which confound and leave Driver's public gaping. He has the power to confuse his critics through his ability to do anything he pleases and make it an art work. Therein lies his originality.'

Metamorphosis
Many of the works lend themselves easily to association with the works of other artists, particularly the surrealist, dada and pop artists. Robert Rauschenberg's work invites obvious comparison, and on seeing Drum Process Unit (1983) for the first time (it is in the McDougall's collection) I was struck by the calligraphic nature of the large wall-hung shapes, immediately recalling the tyre-encircled goat of Rauschenberg's Monogram (1955–1959). One of my favourite works from the exhibition is Soft Hanging (1976), in which soft colour fields and emphasised horizons echo (with ironic humour) Mark Rothko's works.

But anyone familiar with twentieth century art will find myriad references amongst the works in this exhibition – compare Jim Dine's The Housecoat (1970) with Driver's Produce (1982). For a darker, deeper, even more ironic experience, compare Yellow Tentacle Pram (1980) with The Birthday (1968), by Edward Kienholz. Commenting on his internationalism, Driver himself stated that he was motivated 'not by an idea to copy but to make an equivalent from materials around me.'

None of this, however, is intended to imply that the artist's work is largely derivative. His approach is highly individual, varied and relates uniquely to the New Zealand experience. His use of agricultural implements and familiar domestic materials underscore the relationship, but with humour and subtlety (and frequently a sense of threat).

Magic
There is a dark side though – and I confess I can never look at a doll without recalling the macabre constructions of the surrealist Hans Bellmer, whose figurines have a horrific, corporeal, but inhuman, effect. Driver's mannequins, as in Ritual, are like stunted celebrants, enacting rites whose mysteries, like the film Children of the Corn, will menace us for as long as we recall the images. Symbols of death and procreation are sinisterly and potently juxtaposed with the figures of the dolls, which we associate more often with innocent childhood. Priscilla Pitts, in Contemporary New Zealand Sculpture: Themes and Issues, wrote 'Driver seems to be engaged in a grotesque re-visioning of the body, an assertion of its dark and animal aspects, and a questioning of the conventional divide between adult sexuality and childhood innocence.'

An interest in magic was something Driver retained from boyhood. This fascination is the source of much of the ambiguity and mystery in Driver's works. He has admitted that he likes 'to create many levels of meaning,' to make people 'wonder what it is all about,' yet almost paradoxically has denied being a symbolic artist.

There is difficulty in separating the magician from the artist in Driver's works. Like the old stage illusion of sawing the lady in half there is a sense of risk in many of his works and allusions to prestidigitation abound – the coiled pipes in Yellow Tentacle Pram spring from the pram like rabbits from a top hat. However, it is Driver the artist who has the last word, for his works are anything but illusional. The transformation that takes place in his works derives from the selection and juxtaposition of objects and materials and, magically, these assemblages have the power to shock, amuse and provoke thought in a manner that the component parts (many of which are individually mundane) could never do.

Synthesis
What makes Driver's art so fascinating is the facility with which he brings together the various and diverse elements which have influenced him. Even his early training as a dental technician presaged an interest in materials and certainly provided experience in casting and moulding materials. Magic; literature. His collection of Indian and Asian sculptures, was began on his trip to America in 1965. The influence of this trip and his exhaustive visits to galleries throughout the USA can be traced in almost every work in the exhibition.

Driver is a colourist and uses found objects and materials as pure colour elements in his works, in much the same way Matisse used cut paper. Easily classified as a sculptor, working as he does for the most part in three dimensions, Driver's passion for colour is as up front in his three-dimensional works as it is in paintings like Relief No.10 (1972). He has often blurred the boundaries between sculpture and painting. His works are visual feasts and yet challenging at the same time.

The exhibition is being toured by the Govett-Brewster Art Gallery and is accompanied by an excellent catalogue. 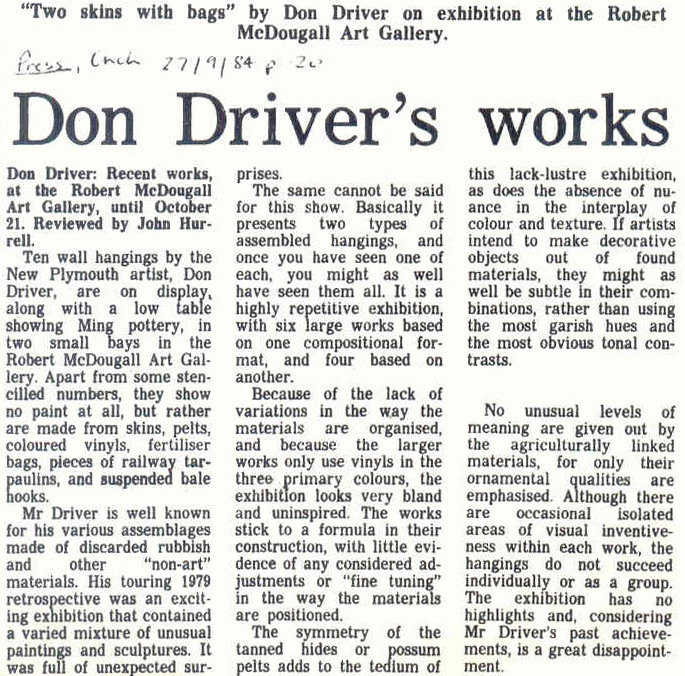