Artists on the Avon

Rivers have played their part as subjects for artists in Canterbury but few in the region have gained more attention for so long than the River Avon. This river has been a source of imagery for both amateur and professional artists since the earliest days of European settlement.

For centuries it was called 'Otakaro' (the place of a game) then, with colonisation, it was officially named the 'Shakespeare' but this found little favour with early colonists who soon abandoned it preferring Avon, the name given to the river by the Deans family.

During the 1850s and 60s only a few amateur artists found appeal in the swampy creek that the Avon then was. Often it appeared as a foreground feature, an adjunct to the more interesting, developments that were taking place on its banks, particularly in Christchurch.

By the 1880s however, Christchurch and its environs had changed dramatically the wild swampy creek that had meandered through the city. It had been tamed and a substantial river now coursed its way to the sea through exceedingly picturesque scenery that took on a new identity as the seasons changed. This many artists were unable to resist as it seemed to exhibit all the variety that an artist, concerned with Romantic naturalism, could want. There were rural views in its upper reaches with cattle wading and drinking, town views with willows trailing and bridges and the calm expanses of the reedy tidal lower reaches as it flowed into the estuary.

By the turn of the century artists were responding more regularly to this ever present natural feature in their midst and it began to have a real place as a subject for artists. It also became more popular for outdoor classes and students from the Canterbury College School of Art were taken to sketch and study this river in its wilder parts and within the city.

Through the 1920s the same interest continued and, as a subject, the Avon was to be found in many exhibits that appeared on the walls of annual art society exhibitions. By the 1930s fewer artists found that the river had the same charm. Changes in attitudes away from the more romantic naturalistic view of the landscape and the urbanisation of most of the environs of the river lead to a loss of interest. Artists were now looking in other directions for sources of imagery.

This exhibition comprises loan works from private and public sources as well as from the Gallery's own collection. The paintings represented span from the early 1850s through to the 1960s and are by artists that include James E. Fitzgerald, John Gibb, William Menzies Gibb, Alfred Walsh, Margaret Stoddart, Jenny Wimperis, Sydney Thompson, John Loxton, Russell Clark and many others. 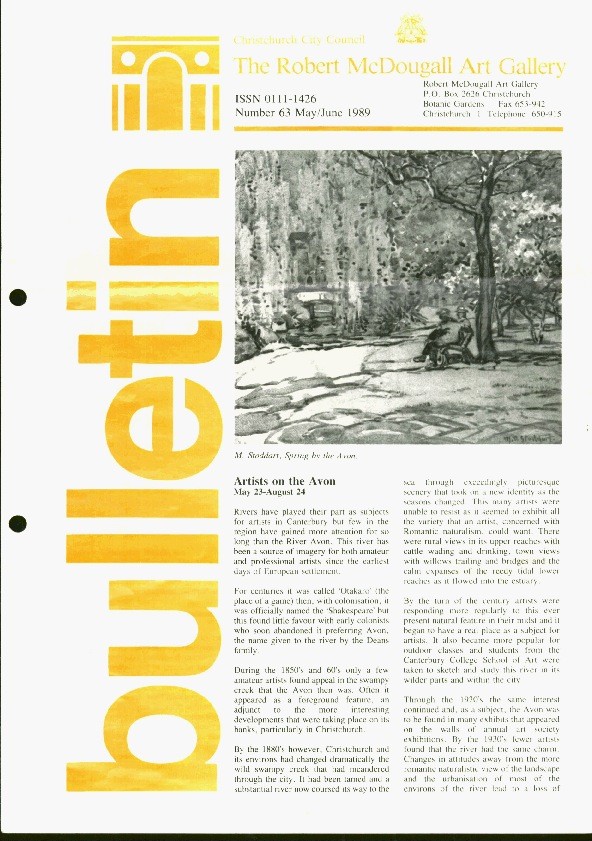