In Cosmos, Bridget Riley updates a set of three colours she first used in 1970. Feeling they had more to give, Riley wanted to explore the mushroom-brown, green and dense grey colours further. Here 561 individual discs have been meticulously painted in a grid, which gives full play to the after-effects generated by these mid-toned colours. As with all Riley’s work, Cosmos requires our active participation. The painting may appear static, but it is as optically charged as any of her works; much like a performer animating a musical score, our engagement brings it to life. The appearance of each colour within the grid defies any sense of regularity, but the relationship of the discs with the wall and the surrounding architectural space is ambiguous and plastic. The title, Cosmos, alludes to an enormous sense of space and depth; an ordered and harmonious universe. And as we experience the work, the push and pull of the discs becomes almost gravitational. Cosmos is the fourth in a series of five significant works purchased to mark the Gallery’s time of extended closure following the 2010–11 Canterbury earthquakes. Unlike most paintings we collect, however, it is painted directly onto a wall in Christchurch Art Gallery Te Puna o Waiwhetū. Cosmos takes time to make when it is shown, but requires no storage when not on display. It may be shown in two venues – but no more – at any given time.—Jenny Harper, exhibition curator and former Christchurch Art Gallery director 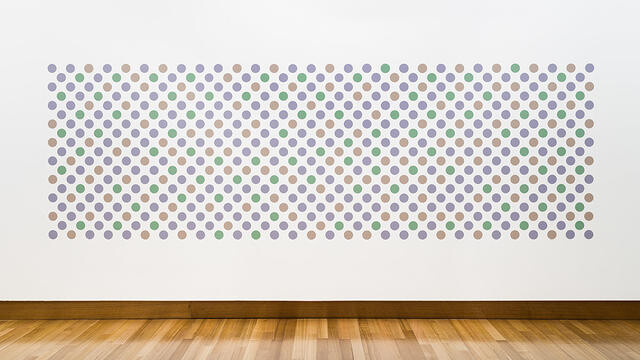 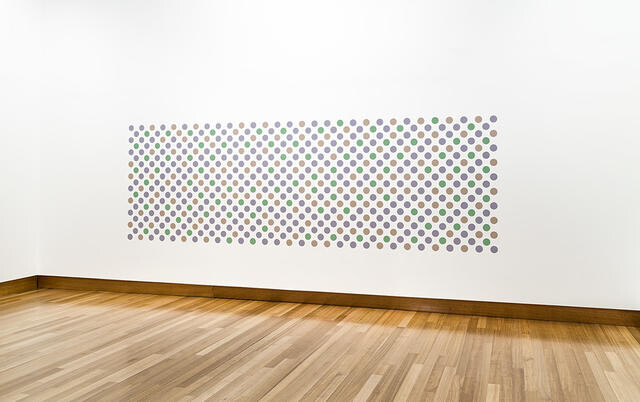