In 1997 Saskia Leek travelled around the United States with a group of friends who were touring in a short-lived band called Spacedust. Back in New Zealand, she painted a series of works inspired by the trip.

“In Detroit they played at a café which didn’t sell alcohol but let you BYO. It was still daytime, but my friend and I were told by a local that we shouldn’t walk alone the two blocks to the bottle store to buy beer. She showed us the knife she’d been carrying in her bag since being attacked. Another friend we met there told us how her house had been burned down by arsonists on Devil’s Night, which is the night before Halloween. That rust belt area across Indiana and Michigan was pretty spooky and dystopian. I remember pulling off the road in the wrong place and driving through street after street of boarded up houses in the pitch black. Huge industrial chimneys on the horizon spewing fire into the sky. I liked Detroit a lot.”

Leek, who studied in Christchurch, observes that the 1990s were a time when “New Zealand culture was changing from being dominated by British media to becoming more focused on America, for better or worse. There was a swell of discontent from the students at the art school who were waking up to the fact that the dominant brand of British modernism there didn’t reflect the kinds of loaded up cultural reference points coming at them from every angle.”

Art School 125: 125 Years of the School of Fine Arts at the University of Canterbury
Canterbury Painting in the 1990s 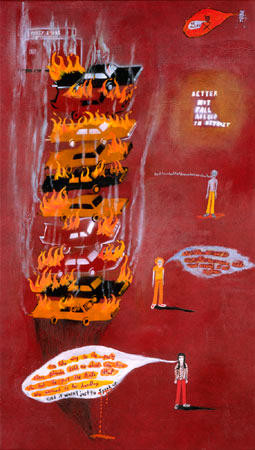