Plant forms and the dynamics of nature are the inspiration for this work. Rudolf (Rudi) Gopas included the numerals 4, 7 and 5 to represent human efforts to define and calculate nature. Gopas came into contact with aspects of German Expressionism in the 1930s, a movement concerned with an expressiveness of style by means of exaggerations and distortions of line and colour. This influence was to remain with him throughout his career and can be seen in 475: City Lights in the highly coloured palette and the obvious and immediate brushstrokes.

Gopas was born in Lithuania and went to art school there, graduating with honours in 1938. He worked as a draughtsman for the Department of Agriculture during World War II and lived in a refugee camp in Austria from 1945 to 1949. Gopas and his wife emigrated to New Zealand in 1949. He lived in both Dunedin and Christchurch and from 1959 to 1977 was a lecturer in painting at the University of Canterbury School of Fine Art. 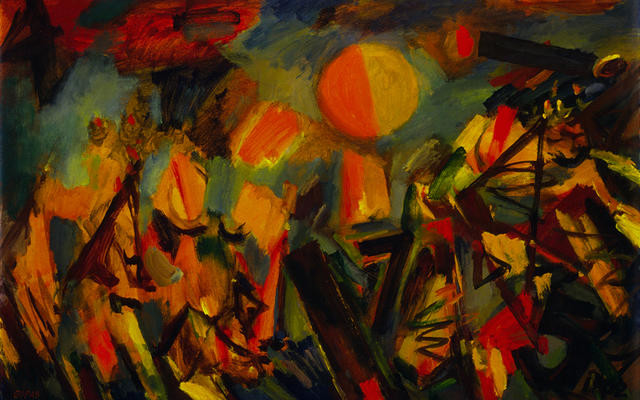