The sitter for this painting wears no jewellery or other adornments and she shows little emotion. In giving no clear clues to her personality, Raymond McIntyre shows her as a symbolic figure, simply suggesting the mood of meditation. An early work by McIntyre, Meditation was painted before he had travelled to London and seen the contemporary styles of Post-Impressionism. The dark, subdued tones were commonly used by his generation of students at the Canterbury College School of Art. Born in Christchurch, McIntyre was awarded a bronze medal for a life study when he was a student at the School of Art. He also studied as a private pupil under Petrus van der Velden (1837- 1913). McIntyre arrived in London in 1909 and studied at the London City Council Central School of Arts and Crafts. In 1911 he began a long association exhibiting with the Goupil Gallery, then the leading international contemporary art gallery in London. McIntyre died suddenly, aged 54. 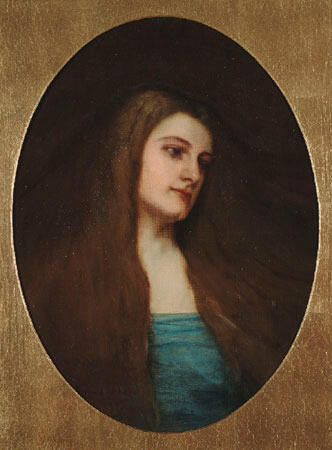