Leo Bensemann’s fantastical rock landscape belongs to a body of works he made in response to the distinctive rock formations around Takaka in Mohua / Golden Bay, and holds layers of personal and art historical connection. Bensemann was born there in 1912, the great-grandson of German settlers who arrived in Nelson in 1843, and had grandparents farming near Takaka from 1901. He retained his strong connection even after moving permanently to Ōtautahi Christchurch in 1931. Takaka became a primary source for many of his later works, like this one, which appear as odes to memory and the land that raised him.On the Takaka Hill also owes much to the art of the Italian Renaissance, appearing like an expanded detail, one of the layered rocky outcrops from a work such as Leonardo da Vinci’s Mona Lisa. It even more strongly resembles the cascading marble drapery of Michelangelo’s Pietà in St Peter’s Basilica. 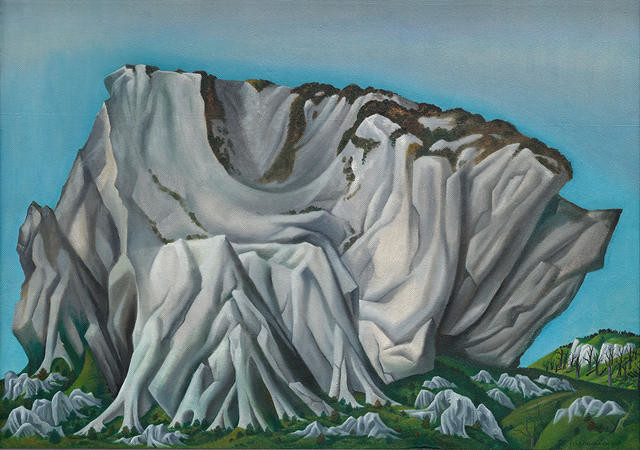