The caption at the base of this political cartoon translates as ‘He will get on. He won’t get on. He will get on’. Honoré Daumier was attacking King Louis-Philippe whom he shows as an obese and incompetent soldier being helped onto the thin and emaciated ‘war horse’ by the legal and merchant classes. Both those groups had much to gain by France declaring war on Spain. Lithography was ideally suited to Daumier’s free and spontaneous style. He was a superb draughtsman, generally working without preliminary sketches, drawing directly onto the lithographic stone. Born in Marseilles, Daumier moved to Paris with his family in 1814. After the revolution of 1830 he began working as a cartoonist for La Caricature. The journal was suppressed in 1835 and Daumier served a six-month prison sentence for his caricatures against Louis-Philippe. Daumier went on to produce over 4000, mostly satirical, lithographs. He became impoverished and blind in old age and was supported by Camille Corot (1796 -1875) who provided him with a cottage at Valmondois-sur-Seine-et-Oise. 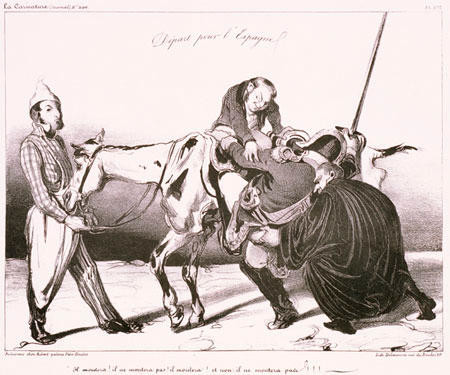