The biblical story of Job is that of God testing Job’s faith with a series of dreadful misfortunes. Here his powerful figure hovers over the kneeling forms of Job and his friends. This impression is plate 13 of 21 plates on the Book of Job. They are regarded as William Blake’s finest work as an engraver. He first sketched his designs directly on the copper plate with a stipple burin, then worked it up with many short strong lines cut with an engraving tool. Blake was born in London and received little formal education. He was apprenticed to the engraver James Basire (1730 -1802) between 1772 and 1779, then he entered the Royal Academy Schools. In 1782 Blake set up an engraving and publishing business in London. For a number of years he enjoyed both popularity and success. However that began to wane, until 1818 when fellow painter, John Linnell (1792 -1882), became his patron. Blake carried out engravings for ‘The Book of Job’ and ‘The Divine Comedy’ for Linnell. 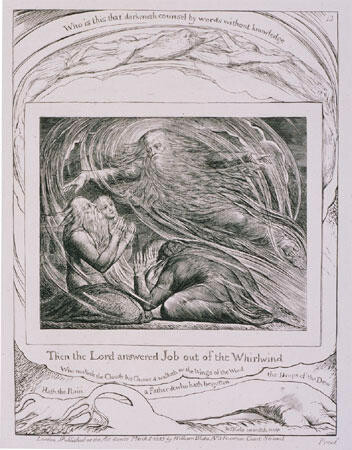