Marc Chagall was commissioned to illustrate the Fables of the French poet Jean de La Fontaine (1621 -1695). In this print the figure of Death appears carrying a menacing knife and the tired woodcutter, now regretting his decision to call on death to come to him, tries to escape, knocking over the furniture in his efforts. Chagall was a prolific printmaker and favoured etching and dry point techniques because they gave him the edgy, immediate quality he wanted in his images. Born in Byelorussia, Chagall studied art under Léon Bakst (1866 -1924) in St Petersburg during 1907. He was based in Paris between 1910 and 1914 and there was influenced by the Fauves and Cubism. Chagall returned to Russia and from 1919 to 1922 was Art Director of the Moscow State Jewish Theatre. However, his art was viewed as too modern by Russian authorities and in 1922 he left for France where he settled permanently, apart from a period spent in the United States in the 1940s. 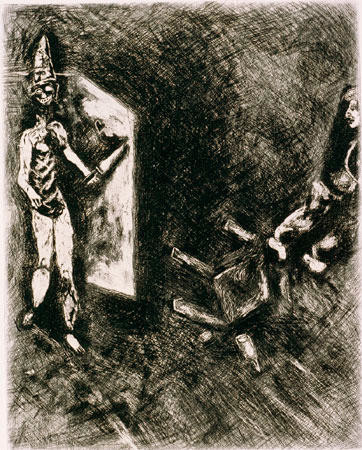