The view in this work, looking down onto a busy metropolitan street scene, was a popular subject with the French Impressionist artists who often painted street scenes from a high viewpoint. James Whistler was one of the most significant figures in British etching during the 19th century. He is now considered to be in the same league as Rembrandt (1606 -1669) and Goya (1746 -1828). Born in Lowell, Massachusetts, initially Whistler learnt the technique of etching while working as a cartographer for the US Navy. He travelled to Paris in 1855 and his first major body of etchings, the French Set, was completed in 1858. Whistler moved to London in 1859. He established a successful painting practice and was President of the Royal Society of British Artists between 1886 and 1888 and President of the International Society of Sculptors, Painters and Gravers from 1897. In 1898 Whistler established his own art school, the Académie Carmen, in Paris. He was one of the liveliest personalities in the British art world of the late 1800s. 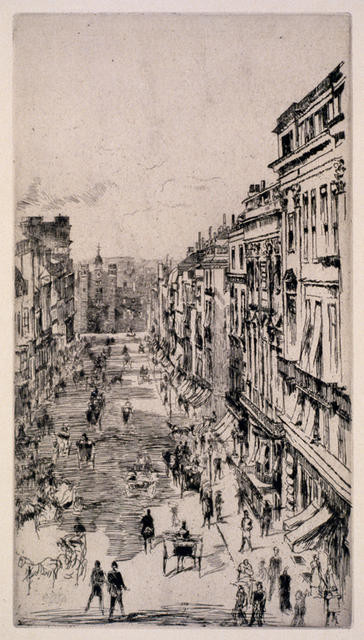