Pamela Wolfe was born in England but moved to New Zealand as a young child. At the time she made this painting she had recently graduated from the Elam School of Art in Auckland and was living in Christchurch. Visiting the Botanic Gardens one day, she took a black and white photograph of her old school friend Sandra Peacock, with the mid-summer garden beds providing a vivid backdrop. "She used to wear vintage clothes, often in bold patterns. I was enchanted with the Pre-Raphaelites by then, and with her curly hair and silk dress in front of the hollyhocks she seemed part of that whole Romantic idea." Later in her studio, Wolfe used a naive style to integrate the background and foreground into a flat, Matisse-inspired field of colours and shapes. This was one of several portraits Wolfe completed during this period. "As a woman with a young child, my friends often became my subject matter” she has said. “I belonged to a feminist group, and we all thought we'd have careers, but at that point we found ourselves stuck at home. There was a real sense of comradeship during that part of my life in Christchurch, of politicised women sharing ideas together in each other's homes." 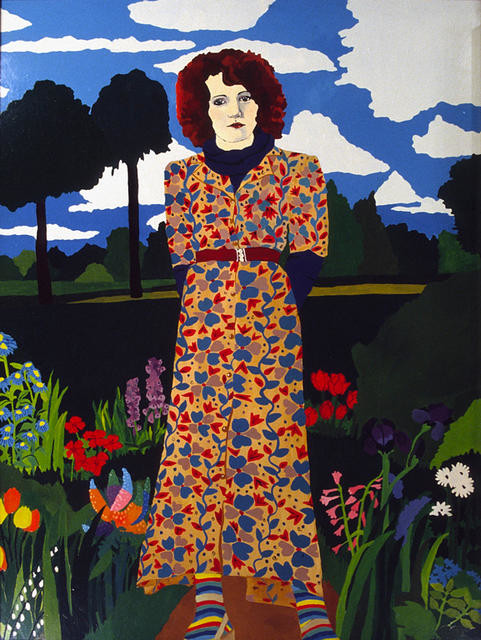